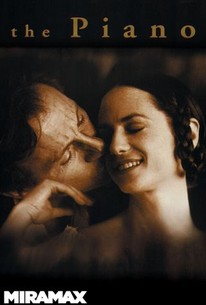 Writer/director Jane Campion's third feature unearthed emotional undercurrents and churning intensity in the story of a mute woman's rebellion in the recently colonized New Zealand wilderness of Victorian times. Ada McGrath (Holly Hunter), a mute who has willed herself not to speak, and her strong-willed young daughter Flora (Anna Paquin) find themselves in the New Zealand wilderness, with Ada the imported bride of dullard land-grabber Stewart (Sam Neill). Ada immediately takes a dislike to Stewart when he refuses to carry her beloved piano home with them. But Stewart makes a deal with his overseer George Baines (Harvey Keitel) to take the piano off his hands. Attracted to Ada, Baines agrees to return the piano in exchange for a series of piano lessons that become a series of increasingly charged sexual encounters. As pent-up emotions of rage and desire swirl around all three characters, the savage wilderness begins to consume the tiny European enclave. Campion imbues her tale with an over-ripe tactility and a murky, poetic undertow that betray the characters' confined yet overpowering emotions: Ada's buried sensuality, Baines' hidden tenderness, and Stewart's suppressed anger and violence. The story unfolds like a Greek tragedy of the Outback, complete with a Greek chorus of Maori tribesmen and a blithely uncaring natural environment that envelops the characters like an additional player. Campion directs with discreet detachment, observing one character through the glances and squints of another as they peer through wooden slats, airy curtains, and the spaces between a character's fingers. She makes the film immediate and urgent by implicating the audience in characters' gazes. And she guides Hunter to a revelatory performance of silent film majesty. Relying on expressive glances and using body language to convey her soulful depths, Hunter became a modern Lillian Gish and won an Oscar for her performance, as did Paquin and Campion for her screenplay. Campion achieved something rare in contemporary cinema: a poetry of expression told in the form of an off-center melodrama. ~ Paul Brenner, Rovi

Stephen Hall
as Seaman
View All

News & Interviews for The Piano

View All The Piano News

Critic Reviews for The Piano

From a distance, "The Piano" seems too preposterous for words; but then, as Ada knows all too well, words merely get in the way.

This is cinema that fills every sense.

As tender, remarkable and sincere as drama comes.

Hunter's performance is outstanding. So is the film.

The film is a masterclass in dramatic structure and rolls through Campion's meticulous screenplay beats with effortless elan, right up to the axe-wielding climax. Almost the perfect film.

The Piano is without a doubt a work of Art - inscrutable at times, and not without its flaws, but constructed so confidently that they are, in the end, forgivable.

One of the all-time greats.

Deeply felt and entranced by Hunter's near-silent performance, this is Campion at her best and great starting place to an underrated auteur's career.

...swirls in melodrama and metaphor.

Self-pity is a very poor foundation on which to construct a work of art, or much anything else for that matter.

Flawless filmmaking abounds throughout, building to a gripping climax that is impossible to forget.

Audience Reviews for The Piano

Holly Hunter and Anna Paquin deliver two terrific performances in this beautiful, haunting story that Campion carries off with sheer sensitivity and in a slow-burning fashion that helps explore the complexity of its characters and themes like restraint, passion and loneliness.

An intense and emotional film. The performances are excellent.

Astounding drama, The Piano is a near perfect picture that boasts an incredible cast of talented actors and has a terrific, well executed storyline. This film is famous for the fact that Anna Paquin who was eleven years old at the time of the film's release won an Oscar for her performance, thus becoming the second younger Oscar winner in film history. The film is a beautiful piece of cinema, in the way that it's been film, acted, directed and told. This is sublime storytelling and if you're looking for a solid piece of drama, then The Piano is worth seeing. Anna Paquin and Holly Hunter have terrific chemistry on-screen, and they are tremendous leads that really add so much to the film's powerful storytelling. Director Jane Campion crafts a brilliant picture, one that is rare in the way it tells a truly engrossing story that is elevated by the strong performances from its cast. Everything about the film is truly hypnotic, the score composed by Michael Nyman adds so much emotion to the story that you are overwhelmed by how grand the film is. This is a masterpiece in terms of pure craftsmanship and the cast just add so much to the enjoyment of the film. The Piano is a richly detailed drama is haunting, thrilling, and it keeps you invested from the first frame right to the final shot. I recommend this film to anyone that enjoys a richly told drama with a great story and top notch cast. The Piano is one the finest films in the genre, and it's a memorable picture that you won't soon forget because it's a chilling, beautiful film that is one of the finest films of 90's. To me, it's always great to see a director that is able to craft something truly grand with a few simple ideas, and that is the case with this film. Holly Hunter and Anna Paquin definitely deserved their Oscars for their roles as this is a near perfect film that has a very good story and magnetic performances that is sure to delight diehard film fans.

This beautiful period piece tells an erotic and yet subdued story, set in the vivid backdrop of New Zealand, and featuring a thoughtfully picked cast of characters. The story centers on eternally mute Ada McGrath (Hunter), an Irish emigrant to New Zealand, with her daughter Flora (Paquin) in tow, to marry a complete stranger (Neill). The landscape is uncontrollably muddy, fraught with rain and fog, and is hard to traverse in petticoats and dress, which Ada obviously dislikes. Being mute Ada relies on her piano in order to gain a voice. The only person who seems to understand this is Aborigine adopted George (Keitel) who makes advances towards his friend's new wife. Tensions boil over when they begin an affair, leading to many steamy scenes between Hunter and Keitel. What rivets you as an audience member has to be the profoundly momentous performance by Holly Hunter. She conveys so many emotional breakthroughs without the use of speech. Though Ada can write down her emotions easily enough, and has her daughter communicate through the use of sign language, she is still very isolated by her way of communication. Neill also gives a varied and heartbreaking performance as Ada's betrayed husband, Stewart, as he wavers between hatred and despicable lust. This is definitely an actor's film, belonging especially to the four main leads. Paquin is even impressive, which makes sense since it led to her win for Best Supporting Actress at the tender age of eleven. This is a beautiful film that speaks on distrust, freedom, and emotional expansion at the forfeit of being comfortable, something seen before but never executed so provocatively.