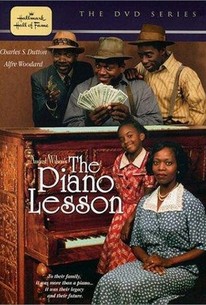 Alfre Woodard and Charles S. Dutton star as sister and brother in this made-for-television Hallmark Hall of Fame production about an African-American family's struggle to retain their heritage. The drama tells the story of an impoverished black family whose history is told in the carvings on the family piano. Boy Willie (Dutton) wants to sell the piano and use the money to buy farmland, but sister Berniece (Woodard) won't part with it. The film chronicles their struggle to come to terms with their family's past, and its future. The critically acclaimed film was based on August Wilson's Pulitzer Prize-winning play and was nominated for numerous Emmy awards.

Courtney B. Vance
as Lymon

Bob Tracey
as Nolander
View All

Critic Reviews for The Piano Lesson

There is an element of magical realism to this story, not unlike Toni Morrison's Beloved, and that comes across well.

Audience Reviews for The Piano Lesson

It was weird... but still a pretty solid movie. I enjoyed when they sang. It was poetic.