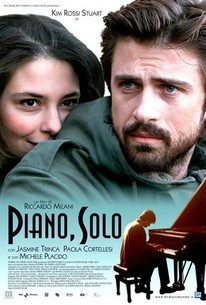 Based on the novel Il disco del mondo by author Walter Veltroni, director Riccardo Milani's musical biopic tells the story of troubled Italian jazz pianist Luca Flores, a consummate musician who was tormented by powerful inner demons during his tragically short life. Beginning with Flores' childhood in Africa, the film follows Luca (Kim Rossi Stuart) as he discovers his love for jazz while studying at a prestigious music school while gradually retreating into his own world of darkness. Along the way, Luca achieves legendary status while performing alongside such jazz greats as Dave Holland and Chet Baker. ~ Jason Buchanan, Rovi

There are no critic reviews yet for Piano, solo. Keep checking Rotten Tomatoes for updates!

There are no featured audience reviews yet. Click the link below to see what others say about Piano, solo!