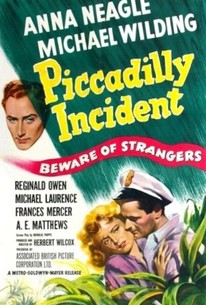 Anna Neagle plays a patriotic young British girl who joins the WRENS when war breaks out. She marries Michael Wilding, the son of an nobleman. Neagle is shipped off to Singapore and is presumed killed in action. Wilding's grief is assuaged when he meets American WAVE Frances Mercer. He remarries, and the couple have a child. But Neagle is not dead, merely marooned on a desert island. Upon returning to civilization, Neagle glimpses her husband and his new family, tearfully realizes that there's no place for her in his new life, and is promptly blown to bits in an air raid. A weeper deluxe, Piccadilly Incident was an unusually morose effort for Anna Neagle and her producer-husband Herbert Wilcox. Casting notes: Michael Wilding was third choice for the leading man after Rex Harrison and John Mills, while Frances Mercer was a last-minute replacement for Marsha Hunt.

Reginald Owen
as The Judge

It remains quite an entertaining film... but it certainly seems a pity that so promising a beginning should have tailed off to such an unsatisfactory ending.

There are no featured reviews for Piccadilly Incident at this time.