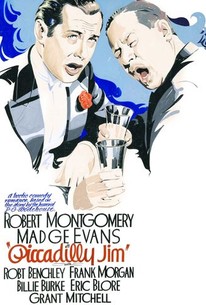 British humorist P. G. Wodehouse wrote the story upon which Piccadilly Jim was based. Frank Morgan and Robert Montgomery play a well-to-do father and son, who find themselves rivals in love. The object of their affection is Madge Evans, who likes them both but favors the son. Everything could have been wrapped up in eight reels, but MGM had a mania about lengthy running times, so Piccadilly Jim lumbers on at 100 minutes. Fortunately, such accomplished farceurs as Billie Burke, Robert Benchley and Eric Blore are around to pep up the dull spots.

Dennis Morgan
as Bit
View All

The picture goes practically hysterical trying to make you laugh.

a rather hysterical oddity

This agreeable but inane farce can easily be forgotten.

There are no featured audience reviews yet. Click the link below to see what others say about Piccadilly Jim!