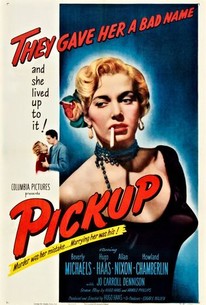 Pickup was the first self-financed directorial effort by the redoubtable Hugo Haas. The film falls neatly into the pattern followed by virtually all future Haas extravaganzas: A romantic triangle involving a susceptible middle-aged man, a scheming blonde wench, and a handsome hunk. Haas himself plays railroad dispatcher Jan Horak, who succumbs to the charms of zaftig doxy Betty (Beverly Michaels). Upon hearing that Horak has a few thousand dollars salted away, Betty inveigles him into marriage. Soon bored by her new husband, Betty inaugurates an affair with Horak's studdish assistant Steve (Allan Nixon). Because Horak is going deaf, Betty and Steve freely discusses their plans to bump off the old man and abscond with his dough. But Horak isn't quite as hearing-impaired as they think he is.

Bernard Gorcey
as Joe
View All

Loved the film for its lurid noir-like atmosphere and the blunt way the loser characters were portrayed.

There are no featured audience reviews yet. Click the link below to see what others say about Pickup!