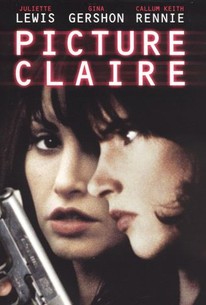 Canadian cult director Bruce McDonald spins this slick noir-thriller about an innocent outsider caught up in the gritty underworld of Toronto. After narrowly escaping her East End Montréal apartment getting torched by a sadistic motorcycle gang, Claire (Juliette Lewis) flees for Toronto where she believes her long lost lover Billy can help her out. Unfortunately, she knows no one else in the city, since Billy is no where to be found, and she does not speak a word of English. She soon encounters sleazy gangster Eddie (Mickey Rourke) and his tough-as-nails moll, Lily (Gina Gershon), who try to draw her into their sleazy business manners. When one of the deals turns ugly, Claire is forced to flee for her life into the heart of the city. This film was screened at the 2001 Toronto Film Festival.

discrepancy between the near-comedic plot and its bloody, naturalistic resolution dooms PICTURE CLAIRE

Gritty and atmospheric, Picture Claire is a dark noir thriller. The story follows a girl who goes on the run after her apartment is burned down, but when she accidentally crosses paths with a smuggler she ends up being pursued by police and gangsters. The film has an interesting cast that features Juliette Lewis, Gina Gershon, Mickey Rourke, and Callum Keith Rennie. And the directing style is quite unusual, using split screens and different color filters. However, the storytelling is extremely poor, as is the character development. While there's some mystery and intrigue to Picture Claire, ultimately it ends up being rather mundane.