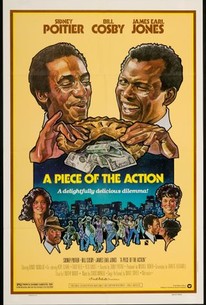 A Piece of the Action Photos

Bill Cosby and Sidney Poitier, co-stars of the comic capers Uptown Saturday Night and Let's Do It Again, team up again for this socially conscious comedy-adventure. This time out, Poitier and Cosby play Manny Durrell and Dave Anderson, Windy City con artists with a long history of cheating crooks who rip off the poor. They are blackmailed by retired cop Joshua Burke (James Earl Jones) into "giving back to the community." Manny and Dave soon find themselves posing as career counselors for a group of surly inner-city youths at a local community center. Despite the efforts of such unruly kids as class clown Gerald (Eric Laneuville) and bitter Barbara (Sheryl Lee Ralph), Manny actually begins to take pride in the help he's giving to his students. Soon, though, he's forced to deal with two additional obstacles: the arrival of his girlfriend's obnoxious parents (Gammy Burdett and Wonderful Smith) and the attentions of a local mobster (Titos Vandis) upset that he's been had. As with his previous Cosby collaborations, Poitier directed A Piece of the Action, whose cast also includes Denise Nicholas as a community center leader, Tracy Reed as Manny's girlfriend, Nikki, and Ja'net DuBois as Nikki's tipsy aunt, Nellie. ~ Brian J. Dillard, Rovi

Critic Reviews for A Piece of the Action

It has its heart in the right place, I suppose, but its key situations are so unbelievable and its dialog so awkward that nothing helps.

Audience Reviews for A Piece of the Action

There are no featured audience reviews yet. Click the link below to see what others say about A Piece of the Action!

A Piece of the Action Quotes