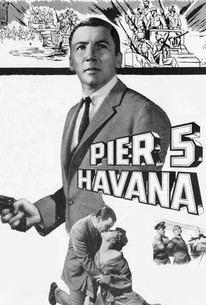 Having the unique distinction of being perhaps the only American drama filmed in Cuba just after Fidel Castro's revolution, Pier 5, Havana is also distinctive because the American hero Steve Daggett (Cameron Mitchell) fights to protect Castro from dangerous pro-Batista counterrevolutionaries. Steve comes to Cuba to find his friend Hank Miller (Logan Field) who has been missing for awhile. It turns out that he has been captured by Fernando (Eduardo Noriega), the leader of the pro-Batista forces, who needs Hank to convert their airplanes into bombers. Steve enlists the help of the local police in his search for Hank. Complicating matters is the fact that Steve's former girlfriend Monica (Allison Hayes) is now Mrs. Hank Miller. ~ Eleanor Mannikka, Rovi

It's worth seeing just to see an American film take sides with Castro over Batista.

There are no featured reviews for Pier 5, Havana at this time.