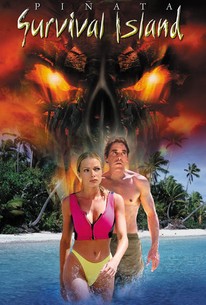 Written and directed by Scott Hillenbrand and David Hillenbrand, the team behind the 1999 Anaconda sequel King Cobra, Piñata: Survival Island is a horror-thriller starring Buffy the Vampire Slayer's Nicholas Brendon. Brendon plays Kyle, one of several college students participating in a reality television show that sends them to an exotic island. Once there, one of the contestants finds an ancient clay piñata and accidentally cracks it, unleashing evil spirits that possess the piñata and begins killing off the unsuspecting teens. Co-starring Jaime Pressly, Piñata: Survival Island has also been released under the title Demon Island.

Tressa DiFiglia
as Connie
View All

Appreciate it for what it is and have a ball!

I was expecting something creepy, you know plot sounds so nice and creepy somewhere in the middle of the Movie I quit. The legend and all in the movie sounds funny. It was good for a laugh but somewhere you ll stop laughing and begin to yawn.

The only good things of this movie were seeing Nicholas Brendon play an intelligent character. The special effects are absolutely terrible and the story line just isn't all that great.