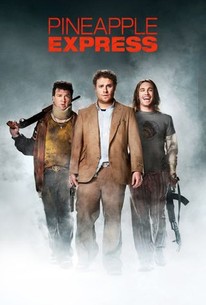 Critics Consensus: Both funny and scattershot, this loose-knit action/buddy/stoner comedy bridges genres and keeps a steady tempo of low-ball laughs.

Critics Consensus: Both funny and scattershot, this loose-knit action/buddy/stoner comedy bridges genres and keeps a steady tempo of low-ball laughs.

Critic Consensus: Both funny and scattershot, this loose-knit action/buddy/stoner comedy bridges genres and keeps a steady tempo of low-ball laughs.

Nora Dunn
as Shannon
View All

This is a baggy, pointless, tiresome film, which is also messy, puerile, cack-handedly gruesome and plain unfunny.

Apatow's former confidence about not underestimating the intelligence of his audiences seems to have largely disappeared.

No sooner did the woeful Step Brothers suggest Judd Apatow's comedy empire was starting to spread itself thinner than a banana skin under an anvil, he strikes back with this almost-classic.

The first half-hour floats by on a cloud of mildly funny lines ("couscous - the food so nice they named it twice"), but then slumps into a derivative action caper that's weirdly and unappealingly reminiscent of Eighties dross like Beverly Hills Cop.

The theoretically fail-safe team of the writer/actor Seth Rogen and co-writer/ producer Judd Apatow - the Knocked Up duo - deliver a funnybone- clobbering spree with more energy than wit.

Pineapple Express has its fair share of laughs, but it's a fundamentally heartless and unlovable minor work from Team Apatow.

Given that Pineapple Express is undoubtedly a lot funnier if you're as high as the heroes when you watch it, its future cult status is assured.

Franco is the true revelation.

Plenty of strong laughs for unimpaired onlookers as well, but be prepared for a jarring, violent finale.

Unfortunately, director David Gordon Green is never able to sustain any comic momentum... Don't get me wrong, "Express" is still good enough that I left entertained -- just not nearly as much as I hoped I would.

Cheech and Chong have found new heirs apparent in the form of Saul and Dale, in a film destined to be a new stoner classic.

David Gordon Green directing a story by Judd Apatow is something that goes against the laws of nature, but even more surprising is how well it works, a great blend of bromance, stoner comedy and highly enjoyable action, with James Franco shining in a hilarious performance.

Incredibly low and silly action comedy about a couple of pot smokers stumbling into a case of corrupt cops and gang wars. The creators obviously thought it counts as humor if you're throwing ash trays at people's ears or just let them mumble nonsense. The surprisingly bloody but pointless showdown doesn't safe much anymore. This is boring and lacks any appeal like surprises, likable characters or a coherent plot. Catastrophic and a shame for everyone involved. Avoid at all costs.

Saul: It's almost a shame to smoke it. It's like killing a unicorn... with, like, a bomb.  "Put This in Your Pipe and Smoke It." Pineapple Express is one of my favorite stoner comedies of all-time. It "hits" all the "high" points that it needs to. It also pulled a great and soon to be classic performance out of James Franco as Saul the drug dealer/stoner. Everything he does, from his mannerisms to how he talks to what he says is a perfect parody/impersonation of a stoner. His performance doesn't reach the level of say Sean Penn in Fast Times, but it is one of the best stoner performances I have ever seen. Dale and his drug dealer, Saul, end up on the run from a corrupt cop and a major drug kingpin Ted. Their experience takes them through shootouts, fist fights, car chases, and wooded adventures. There are some classic scenes in this film. I especially love the woods scene. It's a perfect piece of pothead paranoia and is actually not far from some experiences you've had while smoking the cannabis.  The film has its share of problems. I won't deny that at all. Still this is a film that I can watch and re-watch and watch again. People who aren't laughing after the first scene where we see where the prohibition of marijuana came from should just give up on it there, because it's a sign of the humor to come. This is strictly a drug comedy. Sure there are elements of other forms of comedy, slapstick and sex comedy included; but as The 40 Year Old Virgin was to sex comedies, Pineapple Express is to drug comedies. If you're a fan of this genre, you'll absolutely love this film. If you aren't, you still might like it because it's better than 90% of drug comedies. So give it a try. You may not like it, but then again you may be like me and won't be able to stop laughing. If you want a little help with the experience, toke up beforehand. You'll be howling.

Seth Rogen and James Franco make an unbreakable bond in this smart-witted comedy that's stoned out! The new type of comedy presents more perverse dialogue and dark laughter. But it's still executed well and makes up exceeding due to it's co-stars. 4/5