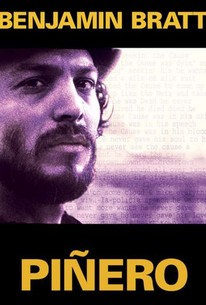 Critics Consensus: Though Bratt is great in the title role, the biopic itself is messy and Piñero grows tiresome.

Critics Consensus: Though Bratt is great in the title role, the biopic itself is messy and Piñero grows tiresome.

Critic Consensus: Though Bratt is great in the title role, the biopic itself is messy and Piñero grows tiresome.

Miguel Piñero became a leading figure in New York's art scene during the 1970s as a poet, actor, and playwright whose vibrant, often pointed, work spoke directly to the lower classes and to disenfranchised minorities. As a founder of the influential Nuyorican Poets Cafe, his poetry soon became recognized as a forerunner to rap and hip-hop music. TV screenwriter turned director Leon Ichaso spins this impressionistic biographical look at this artist. Raised in an abusive family, Piñero (Benjamin Bratt) turns to streets for solace. Soon he is engaging in petty crime, drug dealing, and addiction. When he finds himself in Sing-Sing, he turns his experiences in prison into the play +Short Eyes, which eventually garners him seven Tony awards in 1974. Uncomfortable with his new fame, he clings to his girlfriend, Sugar (Talisa Soto), and his childhood buddy, Miguel Algarin (Giancarlo Esposito), who is a literature professor and who co-founded the Nuyorican Cafe. Though Piñero makes cameos on such shows as Kojak, his art begins to suffer as he starts to succumb to his drug addictions. This film was screened at the 2001 Toronto Film Festival.

Oscar A. Colon
as Bodega Man

Gilbert Collazo
as Miguel As Teen

Gilbert Callazo
as Miguel (as a teen)

Jack A. O'Connell
as Chauffeur

Lydia Trueheart
as Woman with Baby

Pedro Pietri
as Himself

Amiri Baraka
as Himself

Pedro di Pietro
as Himself

Jamal Joseph
as Himself

Miguel Algarin
as Himself

Joanna Newborn
as Fur Woman No. 1

Francine Berman
as Fur Woman No. 2
View All

Overlapping the artist's biography and his work, writer-director Leon Ichaso pointedly reflects the chaos in his subject's shortish life, but he links the artist's frustrations and talent in the usual manner: as cause and effect.

A scattershot stab at a fascinating life and times.

Flashily but irritatingly shot, full of unmotivated switches from colour to b/w, sudden flashbacks, mannered slow mo and jump cuts, this is hardly a subtle evocation of its subject's life.

The narrative jumps haphazardly from set-piece to set-piece.

A vivid rendering of the complexities of the artist's soul, and a notable attempt to convey the trajectory of a volatile creative life.

Bratt's performance is as steady and consistent as the film is frustrating.

Who was Piñero, and more to the point, why should we care? Bratt brings him to life, but we come away appreciating his genius no more than we did before.

A movie of attitude that -- much like its main character -- consumes itself.

The only reason a person hops back-and-forth in one scene, from scene to scene, using (a) color film, (b) black-and-white stock, and (c) digital video (then back to (b), then (c) again, then (a), then...) is merely to do it because they can.

The film's cinematic technique is supposed to be vibrant and alive and reflect Pinero's variegated lifestyle, but it never gets to the soul of the man....

There are no featured audience reviews yet. Click the link below to see what others say about Piñero!