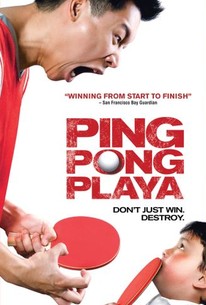 Christopher "C-dub" Wang is a suburban guy who sports an urban swagger, waxes political on all things Asian American, and clings to pipe dreams of a career as a pro basketball player. Blaming genetics for his failure to make the NBA, C-dub lives at home, works a dead-end job, and squirms in the shadow of his older brother, Michael, a doctor and ping pong champion. When the Wang family livelihood is threatened by a rival ping pong player's attempts to lure the kids away, C-dub begins to take things more seriously. With the National Golden Cock Tournament coming up and an injured Michael unable to defend his title, C-dub must become the player he pretends to be and defend his family's ping pong dynasty.

Shelley Malil
as D. B. Reddy

Andrew Vo
as Felix
View All

Mostly a little shrewder about stereotypes than your typical slacker comedy, deriving its edge from Yu and Tsai's mining of the cultural specificity of Asian-America for laughs

Charming despite requisite training sequences and a cartoonishly evil opponent.

There is nothing charming about this man, nothing that makes him loveable, and if he was even slightly worthy of my sympathies and my understanding I certainly didn't see it watching this.

There's no resisting the movie's antic affability or its irreverence, even with Chris's unavoidable progression toward the mature appreciation of his roots.

The movie doesn't take its broad, jokey premise terribly far, but it manages to sustain a goofy-sweet comic energy and offers sly observations about assimilation, sibling rivalry and the art of competitive maternal bragging.

One way to break down cultural walls is assimilation, and that's where Ping Pong Playa has its dubious triumph: it's just about as generic as the next 'loser makes good by coaching kids' comedy...[Blu-ray]

An endless stream of near-misses.

Overall the movie was enjoyable but not amazing.

Gently pokes fun at model minority and athletic stereotypes, but gets repetitive and wears thin before the engaging plot finally kicks into gear.

If you go into Ping Pong Playa' expecting a light, predictable comedy, it would be hard to come out unsatisfied.

"People always think that, you know, Chinese people are only good at math, martial arts, and mu shu pork, you know? But basketball, hey, that was really my thing back in the day, you know what I'm saying? I used to play on the JV squad." Ping Pong Playa is about Christopher "C-Dub" Wang. He's an underachieving, lazy young adult who has no ambitions. He spends his time playing video games, reading comic books, and making up excuses about why he's not in the NBA. Obviously it's genetic, he is Chinese and says that we are all short. He starts teaching a ping pong class and ultimately ends up competing in a ping pong competition in order to keep his families ping pong business thriving. Honestly I expected to find Ping Pong Playa horrible. It's anything but horrible though. Jimmy Tsai as C-Dub was great. The ping pong scenes were really well done. The movie was very funny and had a lot to say about different stereotypes, such as Chinese people can't drive. Ping Pong Playa turned out to be a cool little movie. Hey, it beats Balls of Fury.

Stupid, but made me laugh. I ended up liking it...