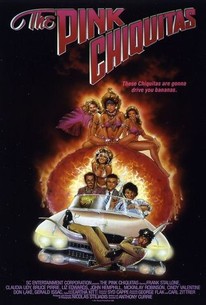 This sci-fi spoof stars Frank Stallone (Sly's brother) as Tony Mareda, Jr., a hot-shot private detective. Mareda leaves the funeral of his father, and while on the road and chased by two gunmen, he picks up a winsome hitchhiker and they end up at a drive in movie. While a "Zombie Beach Party 3" film flickers across the screen, a local weatherman and his date start talking about life in outer space, and lo-and-behold, a pink meteorite lands not far from the drive-in. It turns out that this "pink Mamma" transforms innocent, nubile maidens into pink chiquitas whose lust for men is a prelude to enslaving them and taking over the world.

Eartha Kitt
as Betty, the Meteor

Critic Reviews for The Pink Chiquitas

There are no critic reviews yet for The Pink Chiquitas. Keep checking Rotten Tomatoes for updates!

There are no featured reviews for The Pink Chiquitas at this time.