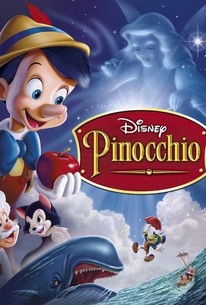 When the gentle woodcarver Geppetto (Christian Rub) builds a marionette to be his substitute son, a benevolent fairy brings the toy to life. The puppet, named Pinocchio (Dick Jones), is not yet a human boy. He must earn the right to be real by proving that he is brave, truthful, and unselfish. But, even with the help of Jiminy (Cliff Edwards), a cricket who the fairy assigns to be Pinocchio's conscience, the marionette goes astray. He joins a puppet show instead of going to school, he lies instead of telling the truth, and he travels to Pleasure Island instead of going straight home. Yet, when Pinocchio discovers that a whale has swallowed Geppetto, the puppet single-mindedly journeys into the ocean and selflessly risks his life to save his father, thereby displaying that he deserves to be a real boy. Based on a series of stories by 19th century Italian author Carlo Collodi, Pinocchio came under fire for being a sugarcoated version of its original tale, but the film's moral did have a strong educational effect on children. Soon enough, a 16 mm excerpt from the picture, titled "Pinocchio: A Lesson in Honesty," was released for teachers to use in schools. ~ Aubry Anne D'Arminio, Rovi

Evelyn Venable
as The Blue Fairy

Charles Judels
as Stromboli the coachman

Don Brodie
as Barker
View All

Taken as a whole, the picture is a masterpiece which sets another milestone along the road of screen entertainment.

Walt Disney has waved his magic wand over Collodi's world-famous fairy story, "Pinocchio," and presto! he has changed it into the most enchanting film ever brought to the screen.

Although it may lack the heart-tugging appeal of Snow White and the Seven Dwarfs, the consensus among animation fans is that 1940's Pinocchio remains the most perfect animated feature Walt Disney produced.

In spirit a classical European fairy tale, full of wonder and terror … a pinnacle of artistic achievement that, after Bambi, classic Disney would never even try to match again.

Walt Disney and his small army of adaptors, animators, and lyric and music writers [have] made the characters of a famous story so captivating and enchanting that the picture is certain to charm children of all ages from 6 to 60 -- and over.

On the technical front, the animation is nothing short of masterful, using elaborate perspective shots that would be unique even in live-action filmmaking.

Snow White and the Seven Dwarfs may have proven that Walt Disney could make a feature length animated film, but it was Pinocchio that showed the medium reaching high art.

The animation is, of course, superb, finely detailed and masterful in execution -- the Monstro whale sequence a standout.

Pinocchio (1940), Disney's second feature-length animated film followed after the success of Snow White and the Seven Dwarfs (1937), and was produced during Disney's heyday from 1937-1942 of animated classics...

The story... is delightful, entertaining, and moving. [Full Review in Spanish]

Collodi's classic fairy tale is adapted into a spellbinding animation full of adventure and tension, notably scarier and more serious in tone than the usual Disney movies. A wonderful story that holds an important moral lesson for children about the dangers of the world.

Fantastical! Wonderful! Amazing! Mesmerizing! These words go above and beyond for this movie, and if I could say anymore, I would call it the best disney film of all time. There are a few films that I like to say I admire more, but I loved everything about "Pinocchio" and all the adventures that he goes on throughout the film. It's all about making your wishes come true by being a good person at heart, and it is one of the most influential films that I have ever seen! I could watch this film over and over again! My only complaint is that is can be a bit dark for children and there is some language and references that nudges at the PG rating, rather than having it's childish G. Overall, "Pinocchio" is a masterpiece of an animate film!

Pinocchio is a great film, but compared to other Disney classics, I never really re watched this one. I on the other hand really loved the film when I saw it when I was young. This film is a must see for everyone who loves a good animated film. The film, like with every other Disney film has great art, animation and a talented voice cast. Brilliantly drawn, Pinocchio will bring out the child in every viewer and is a must see for anyone who enjoys a touching story. I loved this one growing up, but unlike other Disney classics, I never really re watched this, but I can say without a doubt that this is a near flawless film, another great one for Disney and a definite must see for the entire family. Children will love this film one, and this is a film that adults will enjoy as well. That's the beauty part about Disney films, their ability to capture the imagination of people no matter what age you are. Pinocchio is a stunning film, one that remains a Disney classic along with Snow White, Bambi and others in the company's long standing history. A very enjoyable film, Pinocchio is a memorable film that will appeal to anyone looking for a great animated film. An enjoyable ride from beginning to end, this is among Disney's very best. Brilliantly drawn, and told, Pinocchio is a terrific film that has a great story, one that will appeal to every viewer.

Not my favourite walt disney movie that was made however it is a classic and like most of walt disneys movie it has got a great moral story and should be watched!