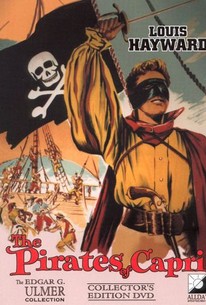 Disciples of "B"-picture stylist Edgar Ulmer will not be disappointed with Pirates of Capri. Lensed in Italy, the film stars Louis Hayward as swashbuckling Captain Sirocco. Posing as a foppish nobleman by day, Sirocco tirelessly works on behalf of a group of insurgents bent on deposing the wicked Queen Carolina (Binnie Barnes, endearingly miscast). Every so often, the Captain pauses to romance Countess Mercedes (Mariella Lotti), whose character name was evidently lifted from The Count of Monte Cristo. The musical score is by Nino Rota, better known for his work on the Godfather films. As in his other films, the resourceful Edgar Ulmer works miracles with a skintight budget.

Michel Sorel
as Nicolo
View All

Critic Reviews for The Pirates of Capri

Uneven but inventive movie about a Zorro-style hero, theater and the French Revolution.

There are no featured reviews for The Pirates of Capri at this time.

The Pirates of Capri Quotes