Pirates of the Caribbean: The Curse of the Black Pearl2003

Pirates of the Caribbean: The Curse of the Black Pearl (2003) 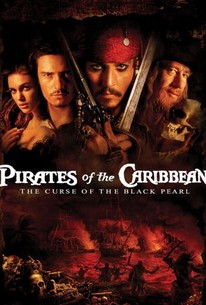 Critics Consensus: May leave you exhausted like the theme park ride that inspired it; however, you'll have a good time when it's over.

Critics Consensus: May leave you exhausted like the theme park ride that inspired it; however, you'll have a good time when it's over.

Critic Consensus: May leave you exhausted like the theme park ride that inspired it; however, you'll have a good time when it's over.

Pirates of the Caribbean: The Curse of the Black Pearl Photos

A tale of adventure set during the 17th Century in the Caribbean Sea. For the roguish yet charming Captain Jack Sparrow, the crystalline waters of the Caribbean, like the high seas the world over, present a vast playground where adventure and mystery abound. But Jack's idyllic life capsizes after his nemesis, the wily Captain Barbossa, steals his ship, the Black Pearl, and later attacks the town of Port Royal, kidnapping the Governor's beautiful daughter, Elizabeth Swann. Elizabeth's childhood friend, Will Turner, joins forces with Jack to commandeer the fastest ship in the British fleet, the HMS Interceptor, in a gallant attempt to rescue her and recapture the Black Pearl. The duo and their crew are pursued by Elizabeth's betrothed, the debonair, ambitious Commodore Norrington, aboard the HMS dauntless. Unbeknownst to Will, there is a curse that has doomed Barbossa and his crew to live forever as the undead--when exposed to moonlight, they are exposed to living skeletons. The curse they carry can be broken, only if a once-plundered treasure is restored.

Orlando Bloom
as Will Turner

Dylan Smith
as Young Will Turner

Ben Wilson
as Seedy Prisoner No. 2

Antonio Valentino
as Seedy Prisoner No. 3

Mike Babcock
as Seedy Prisoner No. 4

Michael A. Thompson
as Simbakka

Don Ladaga
as Nipperkin
View All

News & Interviews for Pirates of the Caribbean: The Curse of the Black Pearl

View All Pirates of the Caribbean: The Curse of the Black Pearl News

Critic Reviews for Pirates of the Caribbean: The Curse of the Black Pearl

Here -- in a Jerry Bruckheimer-produced high-seas adventure that incorporates roaring cannons, oddball comedy, a love story and more than a touch of the supernatural -- Depp unleashes his theatrical bravado. He's hilarious.

And so we leave the cinema happy, our heads full of Gareth and gangsters-at-sea. Context, of course, is all.

Johnny, the kids and the pirates have a number-one hit on their hands. They raise the Jolly Roger and make other summer blockbusters walk the plank.

While Depp has had numerous memorable roles, Captain Sparrow is by far the most intriguing of his characters and displays his talent as an actor.

This comedy is well integrated into the story, helping us to get to know the characters and the relationships that arise between them, but always with the mind of offering the viewer pure popcorn entertainment of the first level. [Full Review in Spanish]

The one bright spot this summer has been Pirates of the Caribbean: The Curse of the Black Pearl ... The story-line ... is silly, but comprehensible and coherent, with traces of Robert Louis Stevenson.

It's Johnny Depp who steals the show, creating a swashbuckling persona so outrageously regaling it would single-handedly guarantee sequels.

There's always too much going on, which is easily forgivable for a while. But as the minutes mount, the flaws are only accentuated.

Ahoy mateys! Shiver me timbers, I think we have a winner here!

Debbie Lynn Elias
Behind The Lens
View All Critic Reviews (222)

Audience Reviews for Pirates of the Caribbean: The Curse of the Black Pearl

Nowadays, Disney has pretty much transformed into a Goliath of a studio. From purchasing Star Wars and Marvel to releasing 80 to 90% quality entertainment in recent years, there is no sign of them slowing down. In my opinion, the beginning of where they are today was precisely Pirates of the Caribbean: The Curse of the Black Pearl. Although this franchise has had its ups and downs over the years, this first instalment is remembered as a classic by many. Sure, there are definitely some non-fans out there, but this is pure entertainment from start to finish. Filled with tons of swash-buckling fun, some likeable characters, and a real sense of adventure, here is why I believe Pirates of the Caribbean: The Curse of the Black Pearl still holds up over 14 years later. Following a hunted pirate in Jack Sparrow (Johnny Depp), an experienced and love-bound blacksmith in Will Turner (Orlando Bloom), and action-wise damsel in distress in Elizabeth Swan (Keira Knightley), this film follows the tropes of classic films in the same genre throughout many years. From the love interest being kidnapped by the main villain (in Barbossa) to the love triangles on the side, there isn't much unpredictability here, aside from a few clever reveals in the final act. From beginning to end, this film finds ways of making this premise feel fresh for a new audience. In my opinion, nearly every character is likeable, which is what makes this film that much more enjoyable. When it comes to #Disney, they're not shy when coming up with new characters to make classics. Although they haven't had too many classic characters in recent memory, say for Elsa or Lightning McQueen (if he even counts), Jack Sparrow is recognized on a global scale. Not only is he fun to dress up as, but he has a large presence on-screen and he is the staple that made this franchise so enjoyable from the get go. Sure, there are eons of stories to tell throughout this world of pirates and treasure hunters, but the interaction between Sparrow and the rest of the characters is truly what makes this film so memorable in my eyes. Upon multiple viewings over the years, my enjoyment of this film has not diminished one bit. That being said, I can't help but feel the length of this film after repeat viewings. It's not that it becomes stale, but there are quite a few moments that take their time to tell the story in order to give the audience some time to recuperate from the previous action sequence. Due to the amount of surprises throughout the course of this film, I'm still able to forgive the slow moments, because the entertainment value this film has, still trumps all. After all these years, Pirates of the Caribbean: The Curse of the Black Pearl still remains the best in its franchise. There are a few pacing issues and quite a few cheesy mistakes in its filmmaking, but this really is just a fun family adventure. As a blockbuster, this first instalment hits every right note it needs to. It won't be able to please everyone, and newcomers that are 14 years late to the party may not quite be as invested as audiences were back in 2003, but there is no denying that there was a large amount of effort put into making this film fun for all ages. In the end, the sword fights, plot twists, sense of adventure, and overall impact of this epic adventure are still very present if you are a fan. Newcomers can still find enjoyment here in bingeing the franchise, so yes, Pirates of the Caribbean: The Curse of the Black Pearl comes no less recommended as it did years ago.

A fun swashbuckling action/adventure that is helped along by a very well-rounded cast, but the main attraction (outside of the fantastic costumes and set designs) is by far Johnny Depp's charmingly iconic turn as Captain Jack Sparrow. I feel like I would have liked this flick more if the pacing had been tighter (20 minutes could have been cut from the runtime), the plot less convoluted, and the direction had been more imaginative and lively.

The original story of the now ubiquitous franchise was an abject lesson in how to create a feelgood summer hit. It has no pretensions to being high art; just a hugely entertaining romp that ticks all the right boxes. Spectacular set pieces, great effects, likeable characters and a well written script that never patronizes the audience. But we all know what really made this film, and that's Johnny Depp's hilariously eccentric performance; he literally owns this film. We all love an anti-hero at the best of times, but what Depp brings to the film is a genuine sense of FUN. Something that's missing all too often from a studio system used to grinding out soulless formulaic blockbusters that completely lack the kind of magic that makes a film special. The final result here is a film that successfully lives up to the traditions of the classic Hollywood swashbuckler from Fairbanks jr and Errol Flynn right through to Raiders Of The Lost Ark. One of the most enjoyable family films of recent years.

Pirates of the Caribbean: The Curse of the Black Pearl Quotes