Pirates of the Plain1999 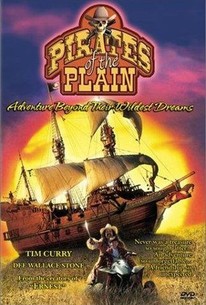 Pirates of the Plain Photos

A young boy with a habit of daydreaming discovers that reality has caught up with his imagination -- with a vengence -- in this comedy-adventure for the whole family. Bobby (Seth Adkins) is an eight-year-old boy growing up on a remote community in the rural Midwest with his mother (Dee Wallace Stone) and grandfather (Charles Napier), who are struggling to keep the family farm afloat. With few friends and not much to do besides his chores, Bobby entertains himself by retreating into a world of fantasy, where he battles cowboys and spacemen and can always outsmart the bad guys. One day, the town looks as if it's about to be hit with a freak storm, as dark red clouds fill the sky, but it turns out that a portal in time has appeared in the atmosphere, and who should drop through but Jezebel Jack (Tim Curry), a swaggering pirate (or, as Jack prefers to put it, "an adventurer of independent means") from the 17th century. Bobby rescues Jack and gives him a place to stay in their house; the boy is happy to have an interesting new friend. However, where pirates go, trouble follows, and it's not long before the ship of a gang of rival pirates follows Jack through the window in time, and Bobby must join forces with Jack as they defend Bobby's home against a pirate ship sailing through the wheatfields.

Critic Reviews for Pirates of the Plain

There are no featured reviews for Pirates of the Plain at this time.

Pirates of the Plain Quotes