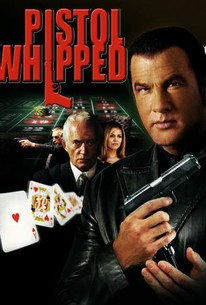 An elite former cop with a serious drinking problem and a sizable gambling debt is offered an opportunity for a fresh start when a wealthy stranger buys up his debts and proposes a deadly partnership. There was a time when Matt (Steven Seagal) was a happily married husband and father, but these days his only companions are an empty bottle and a handful of casino chips. His luck has run out, and now his wife is married to another man and his daughter has a new father. Just when it seems as if things couldn't get any worse for Matt, a mysterious old man appears to offer him the opportunity of a lifetime: Should Matt agree to assassinate one of the city's most feared gangsters, his astronomical debt will be paid in full. But Matt isn't used to being a hired gun, and in order to successfully execute his dangerous mission he will first have to familiarize himself with the complicated system of underworld politics. As clarity takes hold and the prospect of redemption comes within his grasp, this once honest cop realizes there is much more to his assignment than meets the eye as he prepares to make the decision that will change his life forever.

Lance Henriksen
as The Old Man

With these kinds of titles, his projects are becoming increasingly indistinguishable.

...undeniably does continue the upward trend of Steven Seagal's career trajectory as of late...

I have always enjoyed Steven Seagal's films but this was awful. Please - don't waste your time watching it. Sorry

Let's face it...Steven Segal is a man that will not go silently into that good night! You do him wrong and you try to get close to him he will bring you down! In this escapade, He cannot be bought, and he will go all out to reclaim what was taken from him unjustly...his good name. This is Mr. Segal in one of his finest form! See this!

Above average high octane action with action hero Steven Seagal. His early movies are better than this. On the plus side, they don't even bother hiding that face that Seagal has become old and fat. However, he doesn't take himself too serious, by playing a down-on-his-luck drunk. The film itself is alright. The final half hour of the film offers two yawn-provokingly boring scenes of epic gun play. The cutting is too reckless, and the slow-motion (when used) is used badly.

If you've seen a number of other Steven Seagal films, then you've seen this one. It is a slow film with a few decent action scenes. The main character, Matt, plays out like Jackie Chan in Rob-B-Hood. He is an alcoholic guy on the rocks that gambles his life away. In the beginning there are a few hands of Texas Hold 'Em and at least the hands are realistic. A big pot is won by somebody with a 2 pair. There is nothing higher than a 3 of a kind in this sequence. I digress. The story for the rest of the movie is OK, but nothing spectacular. What this film does do nicely is develop Steven Seagal's character.

For the most part this film is pretty boring. There are some long stretches in between the short action sequences and some of these stretches seem unnecessary. One of the early parts of this film involves Seagal scoping out his target and in the way he finishes the job you wonder why he spent all that time scoping him out.

The action is the usual decent Seagal stuff. He is untouchable and he only takes a hit or two throughout. The action comes in only short spurts too. The only exception is the graveyard shootout at the end, which is still nothing spectacular.

The acting is OK at best. Steven Seagal is his usual self and Lance Henriksen is hardly used. The only shining part of the acting is Paul Calderon.

The only people that will find this film amusing are Steven Seagal fans. Everyone else should let this one go.