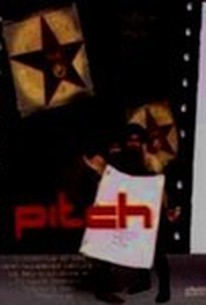 In this Canadian documentary, two young filmmakers attend the Toronto Film Festival and pitch a film concept to various celebrities. Their film idea, titled The Dawn, concerns a Mafia don who goes for a hernia operation but gets a sex change instead. During the 1996 Toronto fest, they approach Roger Ebert, Norman Jewison (at a packed press conference), Eric Stoltz (leaving a limo), Al Pacino, and others without much success. On a roll, they leave Toronto for Hollywood, getting advice from Arthur Hiller and Neil Simon and finding an agent who expresses interest. Shown at the 1997 Toronto Film Festival. ~ Bhob Stewart, Rovi

A non-fiction first feature that pits two homegrown obsessives against the Hollywood elite.

It doesn't help that Hotz and Rice are incredibly obnoxious -- these are certainly not the sort of people we want to root for.

There are no featured reviews for Pitch at this time.