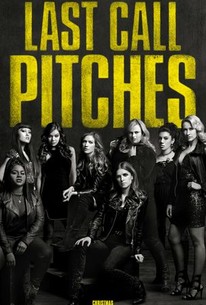 Critics Consensus: Pitch Perfect 3 strains to recapture the magic that helped the original spawn a franchise, but ends up sending this increasingly unnecessary trilogy out on a low note.

Critics Consensus: Pitch Perfect 3 strains to recapture the magic that helped the original spawn a franchise, but ends up sending this increasingly unnecessary trilogy out on a low note.

Critic Consensus: Pitch Perfect 3 strains to recapture the magic that helped the original spawn a franchise, but ends up sending this increasingly unnecessary trilogy out on a low note.

Now graduated from college and out in the real world where it takes more than a cappella to get by, the Bellas return in Pitch Perfect 3, the next chapter in the beloved series that has taken in more than $400 million at the global box office. After the highs of winning the World Championships, the Bellas find themselves split apart and discovering there aren't job prospects for making music with your mouth. But when they get the chance to reunite for an overseas USO tour, this group of awesome nerds will come together to make some music, and some questionable decisions, one last time.

Pitch Perfect 3 does have elements that reconnect you to the charm of the original idea, but it's so out of tune that you are almost thankful for the final curtain call.

The third round of the Bellas is basically a bland, very-occasionally-bubbling-to-the-surface, not-enough-laughs comedy.

I also really liked the closing musical number quite a little bit, and if Pitch Perfect 3 ends up being the Bellas' a cappella swan song, for my part I can't help but feel the entire group goes out on something of a satisfying high note.

Pitch Perfect 3 is so breezy it's completely weightless, but it manages to deliver just enough of the goods.

A typically winning central turn from Kendrick and some Pitch Perfect staples just about save the day.

The strain is showing in this third entry, with too many of the characters placed in developmental holding patterns and too much of the storyline given over to daft contrivances.

What's disappointing about this outing is that Trish Sie ... is one of the most innovative music video directors of the last decade, yet doesn't bring any of that visual flair.

Nothing is sufficiently fleshed out, and no one really cares.

Even as a step down from the prior two efforts, this trilogy capper is a great deal of a cappella fun.

If all you're here to see is some good a cappella performance and one last farewell from the characters you love, Pitch Perfect 3 is merely adequate.

One can only hope this truly is last call, Pitches.

It may have some heartfelt charm and its signature rhythmic sequences to close out the series but Pitch Perfect 3 doesn't hit all the right notes with bloated plot, less-than-believable characters and near senselessness; making this, unfortunately, the least ambitious entry of the series. 2.45/5

Pitch Perfect 3 represents an unfortunate downfall from the scrappy charm and underdog tale that made the original so great, this third installment is the perfect time to walk away. It feels distinctly like a bombastic TV blockbuster that adds unnecessary action scenes. The acapella sequences are especially weak this time too. Rating: 41

Is it as good as the first two....No. but is it funny....yes! Not as charming but certainly will entertain!

Look, I'm not going to be the person who says that they love the original Pitch Perfect film and let that cloud my judgment into thinking its sequels are just as great because they're not. The release of Pitch Perfect back in 2012 was an anomaly. I quite enjoy watching that film and when Pitch Perfect 2 hit theatres, I found myself mildly enjoying it for the musical numbers but ultimately seeing it as a retread. Pitch Perfect 3 is now playing in theatres around the world and I can't say much more about this addition either if I'm being honest, but at least it tried to be different. If you're a fan of the first two, here are the elements that may intrigue you during your viewing of this third and probably final installment. Pitch Perfect 3 follows the Bellas after they've graduated University and moved on to the real world, trying to start careers. When they all realize their lives are miserable without being a part of this team, they form together one last time to travel the world, performing for the troops. This leads them on a journey that will have them realize where they belong in life and possibly even sprout lifelong careers for them. Although incredibly uneven, this film intends to give a solid swan song to these characters in order to conclude a trilogy, and the result is satisfying for fans, but it's not enough to dig itself out of familiar territory. As I mentioned, this is a film that tries to be very different, injecting family aspects and action sequences, but it feels like too much of a departure from the first two movies in terms of story. Many of the jokes are funny for fans of this trilogy, but many of them are sadly just repeats from past films. The best part about these two sequels are easily the musical numbers. I can replay certain scenes from Pitch Perfect 3 in my head and remember having a good time in the theatre, but I very soon realized the inconsistent premise when comparing it to its predecessors. I will say that the third act of this film definitely does a good job in taking care of its characters and truly making you feel like this is the end of a trilogy, but it was a little too late for me by that time. Yes, I enjoyed the musical aspect of the movie, but the heart of the first film just isn't there anymore. Watching characters interact, fall in love, and build chemistry was truly what made me enjoy the first movie so much. Sadly, with many of the cast members mysteriously absent from this installment, it just felt off to me. It makes very lazy attempts to explain why they're no longer around, making me just want to watch the first two again. In the end, I can't say that I disliked this movie, but I didn't like it that much as an overall product either. Yes, the musical numbers and mash-ups are awesome to hear and see performed, but the story itself, along with the interaction of the cast is what made the original as good as it is, and that is the main thing I couldn't seem to find here. I would recommend this movie to hardcore fans of the first two installments, but this movie is surely not for newcomers. I enjoyed the aspects of this film that called back to the first and second and certain characters are given their due, but I just can't truly recommend that a theatrical experience is necessary. Pitch Perfect 3 is a fine conclusion for fans, but not a very good movie overall.