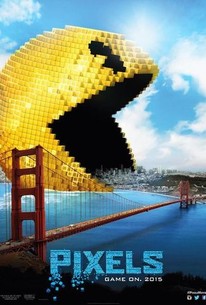 Critics Consensus: Much like the worst arcade games from the era that inspired it, Pixels has little replay value and is hardly worth a quarter.

Critics Consensus: Much like the worst arcade games from the era that inspired it, Pixels has little replay value and is hardly worth a quarter.

Critic Consensus: Much like the worst arcade games from the era that inspired it, Pixels has little replay value and is hardly worth a quarter.

As kids in the 1980s, Sam Brenner (Adam Sandler), Will Cooper (Kevin James), Ludlow Lamonsoff (Josh Gad), and Eddie "The Fire Blaster" Plant (Peter Dinklage) saved the world thousands of times - at 25 cents a game in the video arcades. Now, they're going to have to do it for real. In Pixels, when intergalactic aliens discover video feeds of classic arcade games and misinterpret them as a declaration of war, they attack the Earth, using the video games as the models for their assaults -- and now-U.S. President Cooper must call on his old-school arcade friends to save the world from being destroyed by PAC-MAN, Donkey Kong, Galaga, Centipede, and Space Invaders. Joining them is Lt. Col. Violet Van Patten (Michelle Monaghan), a specialist supplying the arcaders with unique weapons to fight the aliens.(C) Sony

Tom McCarthy
as Michael the Robot

Serena Williams
as Herself

Martha Stewart
as Herself

Daryl Hall
as As Himself

John Oates
as As Himself

The film catalogues the worst set of performances seen in a while, particularly Dinklage's accent and Gad's pubescent antics.

It's a neat idea for a parody disaster film but it's wholly lost in this melange of underwritten characters and awful dialogue.

There are scenes in the surreally lazy, occasionally funny Pixels in which Sandler's face slips into the exact same weary, disgruntled expression he wears in Funny People.

Dinklage and Gad bring an energy to their performances that Sandler conspicuously lacks. However, it's hardly enough. Saving the world is one thing; saving the film is a bigger challenge.

This exercise in Eighties computer-game nostalgia is strangely misconceived.

Monahan is at least given the chance to get her teeth into the role of the army specialist drafted in to help kick some otherworldy ass.

After a spring and summer of heavy, earnest dramas, I'm ready for rampaging digits.

Pixels is a likeable and unpretentious piece of summertime fun, if you can let yourself enjoy it for what it is.

The movie is content to stick to the Sandler template, using the inventive premise as a frame for another of the comedian's tired romantic hook-ups.

A flawed film that serves up just enough of a good time.

Everyone involved [including the audience] deserves a participation award.

Pixels is an alien invasion thriller with childlike sensibilities, which makes little sense since the only people who can appreciate 80's arcade games are all adults now. Also, it's just not funny. The inherit problem is that it doesn't seem to please any demographic. 90% of the humor doesn't appeal to a mature audience, (or anyone with a decent sense of humor) also the story and characterization of cast members much too basic to receive any sort of commendable phrase. Yet if it were a children's film a lot of the rudimentary themes and formulas used would be acceptable, but we're constantly reminded that this is in fact adult entertainment. Pixels isn't devoid of creativity and paints an original premise but fails in recognizing the audience that it's meant to capture culturally. Terms and ideas used in the movie are simply dated. Nerd as a derogatory term? Being good at video games is a waste of time? It's 2015, nerds are the new cool and we have e-sports with Pro gamers earning millions in winnings. It's pretty obvious that the idiots behind this project were just attempting to cash in on the geeky pop culture surge of recent but have no idea what the surge is actually about. If you're looking for sparkly visuals on the movie screen, sure it might be worth a bit of your time but all in all Pixels is an out of touch would-be children's film mired with irrelevant adult themes and lazy acting by Sandler, squandering the efforts of his talented co-stars.

No laughs, no wit, no charm and no better than the recent Happy Madison atrocities.

Up until this point, I had completely lost faith in anything that the Happy Madison studio could possibly come up with, and although this is not their original idea, it was a much more enjoyable film than I was expecting. Adam Sandler and his entire crew of actors, all appear in this film and on a positive side to that, they are not as annoying as they usually come off as. "Pixels" is essentially about video game characters coming to attack earth due to an alien planet misunderstanding video games as threats. The concept is both cool and dumb, but it works in the context of the film. There are some pretty stupid moments, a few cringe-worthy moments, and a pretty streamlined script, but quite honestly, this picture is about Video Games attacking earth, and each time it happens, it is a blast to watch them come to life. Don't get me wrong, I was not tricked into liking this film, in fact, it is bland all around, but the intentions were all there, even if they mostly fell flat. The execution of the main plot was well-handled and I had quite a bit of fun with the action sequences. Some of the actors in this film are getting pretty harsh comments, but I didn't mind them too much. Is this a good film, not particularly, but it was fun. I may be in the minority, but I had some fun with this film. "Pixels" is Hollywood mediocrity at best, but there is something to like inside this "product."