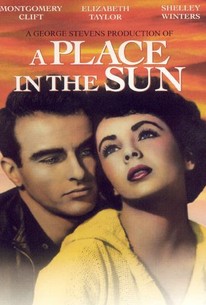 Critics Consensus: Director George Stevens' stately treatment of A Place in the Sun buffs out some of the novel's nuance with blunt moralizing, but riveting performances by Montgomery Clift and company give the drama a bruising punch.

Critics Consensus: Director George Stevens' stately treatment of A Place in the Sun buffs out some of the novel's nuance with blunt moralizing, but riveting performances by Montgomery Clift and company give the drama a bruising punch.

Critic Consensus: Director George Stevens' stately treatment of A Place in the Sun buffs out some of the novel's nuance with blunt moralizing, but riveting performances by Montgomery Clift and company give the drama a bruising punch.

A Place in the Sun Videos

A Place in the Sun Photos

In this film, handsome young George Eastman goes to work in a relative's factory. He has a brief rendezvous with assembly-line worker Alice Tripp, but he forgets all about her when he falls for dazzling socialite Angela Vickers. Alice can't forget about him, though: she is pregnant with his child.

Dolores Hall
as Girl
View All

News & Interviews for A Place in the Sun

View All A Place in the Sun News

Critic Reviews for A Place in the Sun

One of the great studio dramas of the period and one of this column's favourite films, with haunting performances from Elizabeth Taylor and Montgomery Clift.

Montgomery Clift's performance as upward-striving pauper George Eastman is a career peak, and Elizabeth Taylor is a gleaming paragon as his high-society paramour.

Stevens's unsentimental characterisation and the pair's fine performances make this one of Clift's most memorable films.

Gripping from first to last.

While to oldsters Dreiser's novelization of the real-life Chester Gillette case may be a bit on the tired side, there's a vast new generation which undoubtedly knows it only very vaguely, if at all.

Stevens applies Dreiser's naturalistic, class-based fable of the losses and frustrations of American desires towards this celebration of star power, and the resulting tension between glamour and tragedy creates a shimmering, seductive film...

The tragic romance/drama starring Montgomery Clift, Elizabeth Taylor and Shelley Winters is more interesting for the implications just below the surface of a rather standard-issue plot.

A first-rate motion picture that ably mixes romance and murder against a backdrop of social jockeying among the classes.

I saw a Place in the Sun on late-night TV starring Montgomery Clift, Shelley Winters as the scorned girl and Elizabeth Taylor as the rich one, wondering if any film could capture the book's emotional profundity. [George] Stevens' film did, and then some.

There is enough gimmicky, pretentious footage to keep one's eyes glued to the screen while one's common sense and muscles beg for respite.

The forceful script is shuddery, steadily building to an astonishing courtroom showdown and a devastating finale, where heartbreak and agony are certain to cloud redemption.

Mike Massie
Gone With The Twins
View All Critic Reviews (36)

Audience Reviews for A Place in the Sun

A lower class relative of a well-positioned family courts two girls, one a clandestine factory worker and the other a society girl of means, but the unions become problematic when the former gets pregnant. A little more than loosely based on Theodore Dreiser's An American Tragedy, A Place in the Sun is a thorough and fascinating examination of class and the American Dream. George, Clyde in the book, is full of aspirations and lust, but his lack of acceptance in society prevents a healthy expression of his desires. This is not to say that George is innocent, as the film version makes abundantly clear; it's a credit to both the book and the film that the problem is not myopically treated: George is neither a victim of his position nor is he blameless. The film, cutting some truly important events and failing to expose the blame religion has in relation to George's tragic circumstance, is not as full as the book and shortens the blanket of the material's scope. Overall, as adaptations go, this is a very good one though it doesn't live up to the full genius of the original.

MWEEEH not what I hoped or expected. Taylor's character was boring and bland, I know that she can do a lot better. Clift annoyed the crap out of me, in his attempt to play the sexy mysterious psychopath (if he really is one). The so called love interest was just not believable and lacked chemistry, I really didn't get why Angela falls in love with this George. He's probably different from all the other guys she usually meets, but he misses character and depth.

rip liz :'( the film is a showcase for ms taylor at the height of her beauty, along with her male counterpart, montgomery clift. i don't believe there ever was a more breathtaking couple. good suspense tho things get slow when the action moves into the courtroom. shelley winters is great but she can't evade her fate....

A Place in the Sun Quotes