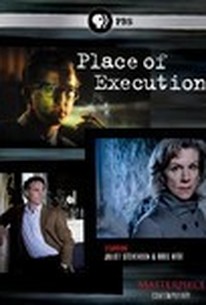 When a documentary filmmaker profiles a star detective, her quest for the facts in a case that's forty years old leads her to a sinister truth in this adaptation of the novel by Val McDermaid. December 1963: a young girl named Alison Carter vanishes without a trace while walking her dog in Scarsdale. Detective Inspector George Bennett (Lee Ingleby) had just been promoted, and this would be his first missing persons case. It was also the case that made him a national hero. Yet despite gathering enough evidence to have his primary suspect executed, Detective Inspector Bennett never was able to locate the body of the missing girl. Four decades later, maverick filmmaker Catherine Heathcote (Juliet Stevenson) focuses her lens on Bennett in an effort to solve that lingering mystery, and discovers a troubling inconsistency in his reports. It seems that the questions raised at the time of the murder have different answers today than they did forty years ago. Perhaps if Heathcote can uncover the reason for that discrepancy, she can finally lay a decades-old mystery - and the haunting pains of a lingering tragedy - to rest. ~ Jason Buchanan, Rovi

Critic Reviews for Place of Execution

There are no critic reviews yet for Place of Execution. Keep checking Rotten Tomatoes for updates!

Audience Reviews for Place of Execution

Truth, and justice, are not the same thing. I was completely taken over by this movie. What I found most disturbing, is that even with all the atrocities the man committed, was it worth the punishment for the one crime he did not commit? Personally, I see justice was done, but this movie portrays the dilemma beautifully...and it is quite a dilemma. I would highly recommend this to anyone who enjoys dramas with a philosophical angle to it. The questions of crime and punishment again are not black and white. Very well made Masterpiece Theater production.