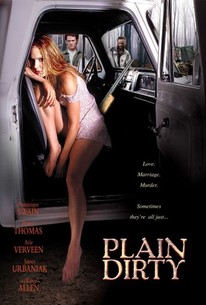 Zev Berman's thriller Killing Edgar stars Dominique Swain as Inez Macbeth, a woman married to the volatile criminal Edgar (Henry Thomas). She has grown tired of their marriage and strays outside of her vows. Edgar finds out and proceeds to hold her prisoner in her own house with the help of his associate, Flowers (Arie Verveen). Inez figures out a dangerous escape plan, but will she be able to get away before it is too late?

There are no critic reviews yet for Plain Dirty. Keep checking Rotten Tomatoes for updates!

There are no featured audience reviews yet. Click the link below to see what others say about Plain Dirty!