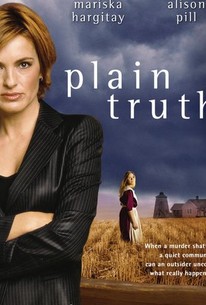 A lawyer immerses herself in an unfamiliar culture to represent an unusual client in this made-for-TV drama. Katie (Alison Pill) is an 18-year-old girl who lives in a small Amish community in the Pennsylvania farm country. When a newborn baby is found dead, police suspect foul play, and Katie is accused of having given birth to the child, then taking its life. Katie protests her innocence on both charges, and Ellie Harrison (Mariska Hargitay), a tough and well-respected attorney, is brought in to defend her in court. Ellie discovers she's a big-city fish out of water among Katie's family as she uncovers a number of untold stories in a community that has cut itself off from the world, and learns a few things about herself as well. Produced for the Lifetime cable network, Plain Truth first aired on October 4, 2004.

Jonathan LaPaglia
as Cooper
View All

There are no critic reviews yet for Plain Truth. Keep checking Rotten Tomatoes for updates!

This was excellent for a TV movie. I read the book it is based on by Jodi Picoult some time ago, and I enjoyed that, so I was very glad to have the chance to see this finally. Alison Pill and Mariska Hargity were perfect in their roles. I really felt so sorry for Katie and all she went through. Really something very different being set in the Amish community too.

An average drama that doesn't do any favours in liking the Amish community! Hargitay does her best with a poor script. Still she looks hot!

Interesting twist at the end!