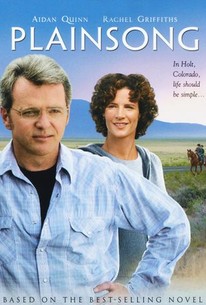 Based on a novel by Kent Haruf, the Hallmark Hall of Fame TV movie Plainsong looks back on a year in the lives of several very special people in a close-knit Colorado prairie community. Deserted by his seriously disturbed wife Ella (Megan Follows), dedicated high school teacher Tom Guthrie (Aidan Quinn) is forced to raise his mentally challenged sons Ike (Mick Hazen) and Bobby (Cody Arens) by himself. Cruelly tormented by their peers and shunned by many of the adults in the community, the boys find a friend and kindred spirit in lonely old Iva Stearns (Marian Seldes), who offers to let them work on her ranch. At the same time, Tom's fellow teacher Maggie Jonas (Rachel Griffiths) comes to the rescue of Victoria Roubidoux (America Ferrera), a pregnant 17-year old Native American girl who has been evicted by her mother. Maggie arranges for Victoria to stay at the home of the McPherson Brothers (Geoffrey Lewis, William Andrews), a pair of crusty old bachelors who have never lived with anyone other than themselves. The stories of these two "extended" families inevitably converge, reaching a crossroads when Ike and Bobby stumble across Iva's dead body. Despite this morbid turn of events, the story gives special emphasis to forgiveness and the acceptance of those who are different -- and the ability to come to grips with the fact that life offers no guarantees. Filmed on location in Utah, Plainsong made its CBS network bow on April 25, 2004.

There are no critic reviews yet for Plainsong. Keep checking Rotten Tomatoes for updates!

There are no featured audience reviews yet. Click the link below to see what others say about Plainsong!