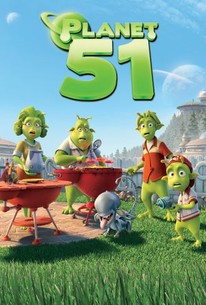 Critics Consensus: Planet 51 squanders an interesting premise with an overly familiar storyline, stock characters, and humor that alternates between curious and potentially offensive.

Critics Consensus: Planet 51 squanders an interesting premise with an overly familiar storyline, stock characters, and humor that alternates between curious and potentially offensive.

Critic Consensus: Planet 51 squanders an interesting premise with an overly familiar storyline, stock characters, and humor that alternates between curious and potentially offensive.

Planet 51 is a galactic-sized animated alien adventure comedy revolving around American astronaut Captain Charles "Chuck" Baker, who lands on Planet 51 thinking he's the first person to step foot on it. To his surprise, he finds that this planet is inhabited by little green people who are happily living in a white picket fence world reminiscent of a cheerfully innocent 1950s America, and whose only fear is that it will be overrun by alien invaders...like Chuck! With the help of his robot companion "Rover" and his new friend Lem, Chuck must navigate his way through the dazzling, but bewildering, landscape of Planet 51 in order to escape becoming a permanent part of the Planet 51 Alien Invaders Space Museum.

So inane that not only is adult enjoyment unattainable, even younger audiences will be on to its lack of intelligence and novelty.

Well and truly aimed at kids, Planet 51 is a film they will thoroughly enjoy yet which any accompanying adult will have lots of laughs in too.

Just how much of this will be appreciated by children is questionable, but the film is clearly intended to keep them happy with lashings of colour, movement and cheesy jokes while older, diehard geeks can enjoy all the reference spotting.

It could have added up to something. Alas, any excitement is submerged by the relentless barrage of trite sci-fi allusions and nudge-nudge gags aimed solely at adults.

Shoots for the stars but still manages to end up going nowhere.

The animation itself is beautiful to behold.

Planet 51 is no instant classic, but it does rate as a pleasant diversion, a kind of bridge on connecting holiday blockbusters with movies you can take the kids to.

"A poorly conceived comedy spotlighting a collection of anal-centric humor that's about as appealing as baseball bat to the face."

In terms of animation, Planet 51 is out of this world. Then there's the story and the characters, which are about as dull as a dirty penny.

Its ok but there are a lot better animated movies out there. The star part is the alien type dog thing.

The whole storyline is something everyone will know they have seen before. Some jokes were funny, others were embarassing and it treads too much into E.T territory Resultingly, Planet 51 isn't good family entertainment. The animation is pretty good but the characters are either cardboard cut out or borrowed from other better films.

Aside from some impressive animation and a few chuckles here and there...a mostly forgettable film. For some reason the fact that the "aliens" looked like gummi sea monkeys, really bothered me. The animation was so good they could have really been more creative with them. But I did love the (Giger inspired) ALIEN "dog".

A pretty generic film. My daughter loved it as soon as she saw Dwayne Johnson was in it lol. Not much to this film in the long run.