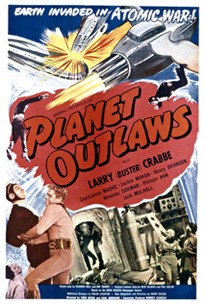 This featurized abridgement of Universal's 12-episode serial Buck Rogers stars Buster Crabbe as Dick Calkins' famed comic-strip space explorer. Buck and his pal Buddy (Jackie Moran) are released from suspended animation after 500 years. They discover that the world is under the thumb of modernistic mobster Killer Kane (Anthony Warde), and are enlisted in the fight against Kane by Wilma Deering (Constance Moore) and Dr. Huer (C. Montague Shaw). Buck and Buddy are dispatched to Saturn to get help in their mission. After smoothing out the internal struggles of the Saturnians, Buck manages to overcome Killer Kane and his cosmic gangsters. Destination Saturn is a stop-and-go experience, not nearly as enjoyable as the complete Buck Rogers serial.

Karl Hackett
as Krenko
View All

There are no critic reviews yet for Planet Outlaws. Keep checking Rotten Tomatoes for updates!

There are no featured audience reviews yet. Click the link below to see what others say about Planet Outlaws!