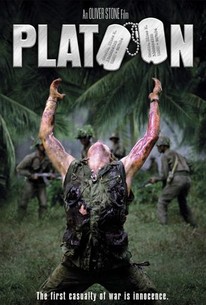 Oliver Stone's autobiographical Vietnam War film stars Charlie Sheen as Chris Taylor, a neophyte soldier who finds himself caught in a battle of wills between two sergeants, one good (Willem Dafoe) and the other evil (Tom Berenger).

Than Rogers
as Village Chief's Wife

Andrew B. Clark
as Tubbs

Oliver Stone
as Officer in Bunker

Ron Barracks
as Medic
View All

Although Platoon is not the easiest film to watch, it is one of the best at reminding us that the cinema is not always interested in evading or distorting history. Sometimes it tells the truth.

This film is an act of courage. Stone, the gutsy writer-director, records in a devastating barrage of images the relentless horror and the senseless carnage experienced by far too many Americans in Vietnam.

Stone's strongest suit, however, isn't so much realism as it is his way of blending immediacy and insight.

There are images in Platoon so powerful that they seem, rather than simply imprinted on celluloid, to have been burned into memory.

Precisely because Stone forces you to experience a grunt's tunnel vision and rage, Platoon is a film of inspiring empathy and awesome force. Curiously, that same tunnelvision in the end compromises Platoon.

This is movie-making with a zealot's fervor.

Everything Platoon has to say is right there on the surface, like a tattoo: "War is hell." There are no layers to suss out. There is nothing to ponder.

Oliver Stone's recreation of the infantry foot-soldier's Vietnam War is an accurate depiction of how little-or-no-choice-having, U.S. drafted soldiers comport themselves, as opposed to true-calling warriors like the elite Navy SEALS in "Lone Survivor.'

It's extremely violent and brutal, yet tragically realistic.

Platoon (1986) is a harrowing, visceral, ultra-realistic, gutsy, visually-shattering Vietnam-war film, based on the writer/director's own first-hand knowledge as a Vietnam combat-infantry soldier. The insightful Best Picture-winning war film

Oliver Stone based his movie on his own experiences and attempted to make a more "realistic" Vietnam movie, simpler and more grounded than things like Apocalypse Now and The Deer Hunter... and he succeeds, truly making this war look like hell.

Platoon is the landmark definition of a war film. Pulse-pounding sequences stacked on well-performed portrayal of soldiers (Sheen, Berenger & Dafoe) as well as a couple of heart-wrenching scenes that would be somewhat difficult to view. The film is Oliver Stone's most significant to date, especially since it's based off his own personal experience in the Vietnam War. 4/5

A more human telling of the Vietnam experience than it's bleakly factual contemporary Full Metal Jacket, this film is almost scuppered by the gimmicky casting of Charlie Sheen in the lead role. The strong supporting cast make up for his obvious shortcomings as a serious actor, however. Watch out for a young Johnny Depp as Lerner.

Sgt. Barnes: Y'all love Elias. Oh, you wanna kick ass. Yeah. Well, here I am, all by my lonesome, and ain't nobody gonna know. Six of you boys against me. Kill me. Huh. I shit on all of you.  "The first casualty of war is innocence." Platoon, often cited as one of the best and most realistic war films ever made, is a stunning and sobering movie about Vietnam. Oliver Stone brings this film to the screen with an extreme amount of power. He explores the war on many levels. It isn't just us vs. them, but us vs. us. There's senseless killing, drug use, rape, and all of it is viewed from the point of view of the soldiers. The movie is, at times, hard to watch. It's graphic, it's gritty, it's real. It gives you a little taste of the hell that was Vietnam. Taylor is a new arrival to the war. New arrivals basically get shit upon. You have to earn the respect of your fellow soldiers by putting your time in. Taylor wasn't drafted, but voluntarily went because his grandfather and father both fought in wars. He falls under the guidance of a good leader in Sgt. Elias. There's a lot of inner fighting between the platoon as some side with the vicious Sgt. Barnes, who has no qualms with killing civilians, and some side with Elias. The battle sequences are as intense as you'd expect and we see characters transformed through these battles into killing machines. The movie looks amazing, but it also sounds equally amazing. There's also an amazing all-star cast bringing everything to life. Willem Dafoe, Charlie Sheen, Tom Berenger, John C. McGinley, Forest Whitaker, and  Johnny Depp are the biggest names, but the rest of the huge cast give great performances as well. Through the great performances, the audience deals with a ranging amount of emotions. The movie is at times terrifying, at times sad, at times infuriating, and even at times funny and heartfelt.  There's a reason this movie is regarded as the classic it is, and after watching it you'll understand. This is one of Stone's very best movies and one that will never lose a touch of its power. Fifty years from now, this movie will still be every bit as powerful. This is a must see for everyone. It doesn't matter if you don't like war films, or you don't like Charlie Sheen, or you don't like Oliver Stone. It should be required viewing.