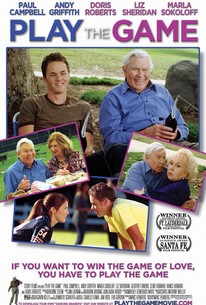 Critics Consensus: Andy Griffith is his usually likable self, but he's stranded in a middling comedy that's surprisingly tasteless and poorly crafted.

Critics Consensus: Andy Griffith is his usually likable self, but he's stranded in a middling comedy that's surprisingly tasteless and poorly crafted.

Critic Consensus: Andy Griffith is his usually likable self, but he's stranded in a middling comedy that's surprisingly tasteless and poorly crafted.

A handsome young ladies' man attempts to teach his widowed grandfather the finer points of dating in the new millennium in this comedy featuring beloved television icons Andy Griffith, Doris Roberts, and Liz Sheridan. When it comes to meeting women, David knows every trick in the book. Lately, David (Paul Campbell) has noticed that his grandfather Joe (Griffith) seems more lonely than usual. Joe lives in a retirement community, and though he longs for companionship, it's been so long since he's dived into the dating pool that he's forgotten how to swim. As David begins instructing Joe in the finer points of impressing the ladies, the spry retiree becomes the most popular bachelor in the retirement community. Unfortunately, the girl of David's dreams sees right through his transparent techniques, leaving the young Don Juan to wonder if he's lost his magic touch. Before long, the tables have turned, and Grandpa Joe teaches David that sometimes the best way to win in the game of love is to stop playing games altogether.

Juliette Jeffers
as Carrie
View All

News & Interviews for Play The Game

View All Play The Game News

Critic Reviews for Play The Game

There's a good comedy to be made about sex among seniors, but the low-budget indie film Play the Game is not that movie.

While Fienberg's direction is no great shakes, the film showcases its veteran cast.

Stay home and find yourself a Golden Girls marathon.

Play the Game has all kinds of good intentions, but the comedy is too broad and the pacing is clumsy. Take away the dirty parts, and this is the type of thing you can get for free on the Hallmark Channel every day.

Veering between syrupy sweet and awkwardly dirty, Play the Game is a woefully scoreless exercise.

The good news is that the seemingly perennial TV fixture is still funny and sharp and folksy. The bad news is that he lost the bet, or whatever it was that got him into Marc Fienberg's smarmy, lackluster comedy.

Griffith has honestly never been funnier, and Play the Game is a delightful, thoroughly entertaining romantic comedy that reminds us all just why we fell in love with him in the first place.

It's too bad things get so crude, because the film otherwise has a certain charm.

I never contemplated what Andy Griffith's face would look like during orgasm, and I curse this atrocious and shoddy romantic comedy for making Griffith do it and making anyone watch it.

Surprisingly sexual in nature, and not just because it seems so concerned with the sex practices of the elderly. There's too much of that sort of material here and not nearly enough of the stuff we really want to see.

It isn't great movie-making, but it is a cheeky good time -- even if you've never wondered what Opie's pa would look like after a jolt of Viagra.

This isn't so much sitcom fare as dinner-theatre material, directed without an ounce of style or panache and played more broadly than an old vaudeville routine.

Audience Reviews for Play The Game

I really liked this movie!! Who knew that Andy Griffith was gonna turn out to be an hysterical old geezer?! The rest of the cast did a wonderful job, also. The whole thing had me clapping at the end (yeah, I know..I'm a dork!). But seriously, this was a fun, witty, romantic comedy and I would recommend it to anyone.

Play the Game is about two playas. The first one is David (Paul Campbell), a sleazy car salesman who is your stereotypical man whore who knows all the moves, their counters and counters to said counters. So he will get shown up by a girl before the end of the film. The second player is Andy Griffith. Yeah, Sheriff Taylor. He starts out as your stereotypical old man, but by the end is the Ron Jeremy of the old folks home. It's role reversal, see? Get it? Let's be honest. The only audience for this film are people who are interested in seeing Andy Griffith talking about erections and having oral sex. No, it's not Thelma Lou, it's Seinfeld's mom. If you take that away this film is a badly written, acted, and directed film that is such a cliche it's putrid. But Andy Griffith dresses like P Diddy. Pure crap. Of course the use of Clint Howard as Andy's estranged son is of some importance.

CAST: Paul Campbell, Andy Griffith, Marla Sokoloff, Doris Roberts, Liz Sheirdan, Clint Howard DIRECTED BY: Marc Fienberg SUMMARY: A young ladies' man teaches his dating tricks to his lonely, widowed grandfather, and plays his best mind games to meet the woman of his dreams. MY THOUGHTS: It was good. I laughed and cringed quite a bit. Laughed, cause surprisingly it was funny. Cringed cause there are some things these older people do and say that you just don't want to see them or your grandparents doing or saying. But hey, more power to them. LOL. It's worth the rental. But if you got netflix instant play, you can watch it on there like me.

Play the Game is the type of movie for which you don't know what to expect. Very little publicity, a shaky premise about a grandfather-grandson relationship that seems implausible, and a cast that isn't quite a stellar -- or even a recognizable -- amalgamation of talent. David (Paul Mitchell) is a ladies' man of the most arrogant and calculating kind. When he comes across a girl he can't have so easily (Sokoloff), he goes into panic mode because his usual tricks aren't working. Meanwhile, his grandfather (Andy Griffith) is the lonely old man at the retirement home who is, as opposed to his grandchild, a wallflower in search of companionship. Now, each man (grandson/grand father) must help the other in order to help themselves achieve their goals of securing themselves a woman to be with. As it turns out, though, in playing the dangerous game of love, their roles suddenly become reversed and one is looking for long-term love, while the other is miraculously in need of instant gratification. You guess what happens next... The movie starts off quite shakily because of its preposterous plot and initial devises which are used to induce humor (including a horribly un-funny scene with grandpa at the club.) But the movie, slowly, manages to lose its uneasiness as the script begins to deliver some tender and genuinely funny moments via its patriarchal character; grandpa Andy Griffith. The film's execution is rather crude and choppy, and its soundtrack is incredibly sappy (with cues being brought in after almost every line of dialogue.) These erroroneous decisions often make the film seem like an after-school special or made-for-television movie that's supposed to teach you the value of family and being "tight." The film manages to overcome its sappy trappings thanks, single-handedly, to Andy Griffith and his earnest and endearing performance as the meek old man-turned sex maniac. Additionally, a plot twist seemingly thrown in during the final minutes was cute and made for a slightly interesting revisiting of earlier events that had transpired in the film; but was ultimately unnesessary. It really didn't pay off, considering the movie was one whose self-awareness was already well pronounced and still failed to completely rise above its own attempt at wittiness. Kudos for Griffith, though!