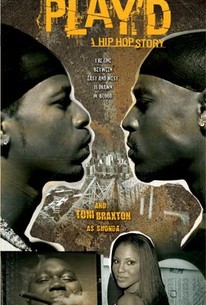 The intense and often deadly "rap wars" between the East and West Coast hip-hop artists of the 1990s was the inspiration for this made-for-cable feature. Rashaan Nall stars as rising East Coast rap star Jaxx, who has formed a musical partnership with longtime buddy Mayhem (Merlin Santana). Enter Domino Breed (Faizon Love), ruthless CEO of Da Block Records, a West Coast label. Filling Jaxx's head with promises of solo stardom and innumerable creature comforts (not all of them legal), Domino lures the young performer to California. As he becomes immersed in the gangster lifestyle common to so many of Domino's disciples, Jaxx grows distant from his friends and loved ones, especially his wife Shonda (Toni Braxton), who had originally been in favor of her husband's career move. Inevitably, the greed-dictated rivalry between Jaxx and his former partner Mayhem culminates in tragedy. Boasting an impressive wall-to-wall musical score by a number of top rappers, Play'd: A Hip Hop Story debuted June 26, 2002 on the VH1 cable network.

Has the skills to pay the bills, and if you want to get with this cinematic next stuff, check it.

There are no featured reviews for Play'd: A Hip Hop Story at this time.