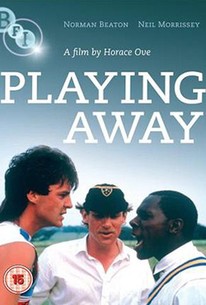 Cultures collide at a cricket match in this British drama that begins when an inner-city London team comprised of West Indian immigrants accepts an invitation to play a match in stuffy Snedington, an upscale country village, as part of their "Third World Week" celebration. The story is divided into three sections. The first introduces each team as they prepare for the match. Both teams have many internal clashes between their disparate members. The middle of the story chronicles the festival itself, as the members' attempts to end racism and cultural misunderstanding only manage to increase it. Finally there is the match itself, in which the teams hash out their differences once and for all.

Critic Reviews for Playing Away

There are no featured reviews for Playing Away at this time.