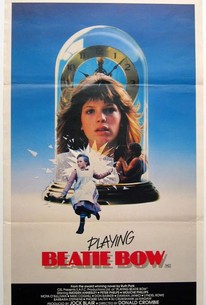 In modern-day (1985) Sydney, Australia, teen-aged Abigail discovers that she can communicate with at least one apparently dead person, who lived in that town back in 1873. As their communications continue, Abigail suddenly finds herself transported back in time. In this light drama, based on a novel by Ruth Park, she discovers a great deal more about herself than she would have done had she remained a discontented teen in modern times, and she contributes to the lives of those around her in meaningful ways. ~ Clarke Fountain, Rovi

Johnny Hallyday
as Ben
View All

Playing Beatie Bow is a marvelous change from the gross, self-centered attitudes to which most teen-pix pander. It is intelligent, funny, well-crafted and imaginative. And whether you are six or 106 you should find it refreshingly free of condescension.

There are no featured reviews for Playing Beatie Bow at this time.