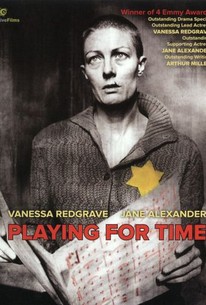 In this made-for-TV movie, Jewish cabaret singer Fania Fenelon is shipped to the Auschwitz death camp in 1944. Fenelon is certain that she is doomed, but SS camp matron Shirley Knight orders Fenelon and several other female inmates with musical ability to form themselves into a prisoner's orchestra.

Critic Reviews for Playing for Time

... one of the most powerful TV events of its era.

Audience Reviews for Playing for Time

Intense, visceral performances by all but of course the story is so awful that it is a film that can only be appreciated not enjoyed.