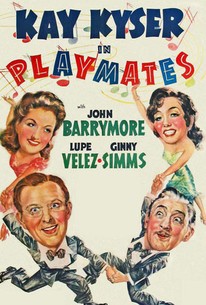 The much-maligned Playmates callously offers the appalling spectacle of a thoroughly dissolute John Barrymore in his final screen performance, but the film isn't quite as bad as it's supposed to be. Barrymore plays himself, a washed-up ham actor up to his ears in debts. When the IRS demands payment for back taxes, Barrymore's press agent Pete Lindsey (Peter Lynd Hayes) and manager Lulu Monohan (Patsy Kelly) suggest a sure-fire moneymaking scheme: the venerable thespian will transform bucolic bandleader Kay Kyser (also playing himself) into a Shakespearean actor, in exchange for a fat radio contract. Neither Kyser nor Barrymore are keen on this set-up, but while Kyser is willing to go through with the plan, Barrymore seeks various devious methods of wriggling out of the committment. Barrymore goes so far as to sic his peppery girlfriend Carmen del Toro (Lupe Velez) on poor Kyser, hoping to dissuade the bandleader from showing up at the climactic Long Island Shakespeare Festival peformance. When this fails, Barrymore spikes Kyser's throat spray with alum, only to be rendered speechless himself when the spray bottles are switched. Suffice to say that all ends happily, with Kay Kyser and his aggregation (Ginny Simms, Harry Babbitt, Ish Kabibble et. al.) performing a rather pleasant "swing" version of Romeo and Juliet. Admittedly, it's rather hard to watch Playmates knowing that John Barrymore had once been regarded as the greatest actor of his generation. Even so, a few bright moments shrine through, notably a poignant scene in which Barrymore briefly recaptures the old magic by reciting a few passages from +Hamlet's soliloquy.

May Robson
as Grandma Kyser

Ish Kabibble
as Himself

Sully Mason
as Himself

Harry Babbitt
as Himself

M.A. Bogue
as Himself

Rube Schaffer
as Masseur
View All

A great comedy that I highly recommend. [Full Review in Spanish]

It's all too much for our taste. [Full Review in Spanish]

There are no featured reviews for Playmates at this time.