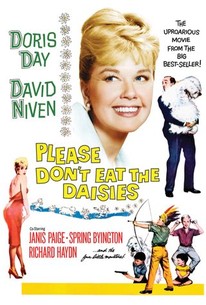 In this entertaining comedy by Charles Walters, everyone seems to get in on the act, even the dog and especially the four overactive kids in a wildly challenging family. David Niven co-stars with Doris Day as Lawrence and Kate Mackay, distinctive parents struggling with home, life, and family. Lawrence opts for leaving his job teaching at Columbia University in New York for a post as a drama critic for a Gotham newspaper, bringing new problems to the pile the family already owns. First, they are forced to move out -- far out -- to the countryside with their brood and canine. And next, while Kate handles home, hearth, and hellions, Lawrence proceeds to alienate one of his best friends with a shattering review. That unhappy beginning to his new career also brings in one of the actresses damaged by his cutting remarks (Janis Paige), who wreaks her own form of havoc on poor Lawrence. In the meantime, Day gets to sing some songs which add to the light-hearted attitude of it all. ~ Eleanor Mannikka, Rovi

Milton Frome
as Gus the Waiter

Kerr's best-seller was a plotless package of anecdotes about her parental ordeal in raising a houseful of Lovable Brats. The movie, although droll in spots, clumsily tries to make a big thing of the fact that Daddy is a New York drama critic...

Doris Day's fluffy comedy, made at the height of her popularity, is based on Jean Kerr (married to film critic Walter Kerr), and co-stars a smooth David Niven as her husband.

Cute little flick, and it has absolutely nothing to do with daisies.

It's so ho-hum, it's hard to stay awake through it. And the title? One of the Mackay kids eats the daisies at the new house. Somehow, in the book that seemed a lot funnier.

There are no featured audience reviews yet. Click the link below to see what others say about Please Don't Eat the Daisies!