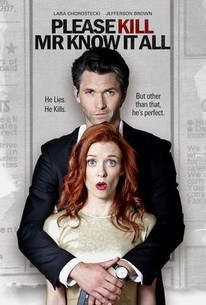 The anonymous author of a popular advice column is pursued by a mob hit-man whose face she picked at random for her byline sketch. While she isn't searching for a book deal, aspiring novelist Sally (Lara Jean Chorosteki) earns her pay by penning the "Mr. Know-it-All" in a local newspaper. When a celebrity endorsement plunges Sally into the national spotlight, however, her agent requests a headshot to accompany the column. Sally responds by submitting a sketch of Albert (Jefferson Brown), a random stranger she spotted at the movies. What Sally has failed to realize, however, is that Albert is a notorious contract killer working for a powerful mob boss (Al Sapienza). When Albert's identity is compromised, he vows to kill Mr. Know-it-All. Meanwhile, Sally attempts to gather more information on the man whose visage she borrowed through a series of clandestine interviews that lead to a heated romance. Later, when Albert's boss is dumped by his girlfriend over advice doled out by Mr. Know-it-All, the kingpin puts out a contract on the columnist. Later, when Albert discovers Sally's secret identity, the conflicted killer is faced with a difficult decision. ~ Jason Buchanan, Rovi

Critic Reviews for Please Kill Mr. Know It All

The ride gets bumpy almost immediately ... and the scenery is as familiar as what you might see driving to a job you've had for more years than you care to remember.

Audience Reviews for Please Kill Mr. Know It All

There are no featured audience reviews yet. Click the link below to see what others say about Please Kill Mr. Know It All!