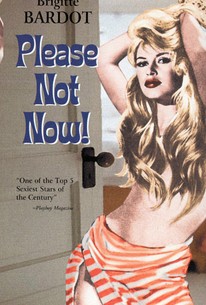 In this romantic comedy, voluptuous Parisian model Sophie (Brigitte Bardot) is angered when she learns that her boyfriend Phillipe, a photographer, has been playing around with Barbara, an American heiress. Alain, another man, who has secretly loved her for years, suggests she get even by making love to him. Sophie has a better idea, she will follow her Corsican family traditions and simply shoot him. Alain warns the photographer who takes his new girl and flees for the Alps with Sophie and Alain in hot pursuit. In the scenic mountains, Sophie and the 'other' woman meet. Together they decide the men are not worth the effort and begin to despise them. This film contains the once-controversial "nude" dance scene with Bardot (who actually wore a body stocking).

Jean Tissier
as Concierge
View All

Critic Reviews for Please Not Now!

There are no critic reviews yet for Please Not Now!. Keep checking Rotten Tomatoes for updates!

There are no featured reviews for Please Not Now! at this time.