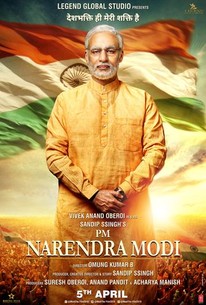 The film showcases Modi's remarkable courage, wisdom, patience, dedication to his people, his acumen as a political strategist, his leadership that inspired a thousand social changes in Gujarat and later India. It traces his childhood in the 1950's to his meteoric rise in the corridors of politics, as a four-time serving Chief Minister. The film culminates in Modi's overcoming all the obstacles to create and lead one of the most fascinating and successful election campaigns in world politics in 2013-14.

Regardless of what side of the political spectrum you are on, I highly doubt anyone needs this movie in their life.

The ridiculously short production and post-production period is unfortunately transparent in the shoddy end result.

Omung Kumar B's PM Narendra Modi is not a biography. It is an unwittingly farcical, comical hagiography.

There is an interesting film yet to be made that would examine his rise and what led to it. This is not that film.

This is a monumental ode to hubris.

A trifecta of awful writing, acting, and filmmaking, PM Narendra Modi's ridiculous alt-narratives take a sinister turn when it presents its "version" of the Godhra riots.

Whether you believe or don't believe in the political philosophy of Narendra Modi is secondary, as a film, this one is too lopsided for you to appreciate.

Renuka Vyavahare
The Times of India

If you are a Modi fan, then you are likely to savour this sucrose-fuelled biopic. But if you are a movie fan, then this is no riveting cinema and you may even see red in this saffron-hued utopian tale.

There are no featured reviews for PM Narendra Modi at this time.