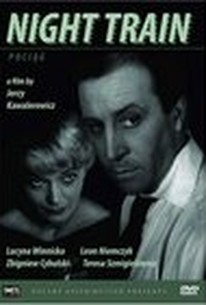 Originally titled Pociag, this Polish Hitchcock homage stars Lucyna Winnicka and Leon Niemczyk. A mysterious young man (Niemczyk), claiming to be a doctor, boards the night train. Overcrowded conditions compels the new passenger to share a sleeping car with a secretive young woman (Winnicka). Neither of these reluctant companions is prone to small talk--and both seem to be hiding something. In fact, both seem to be running away from something. Once we've digested all this, it is revealed that the police are searching for a murderer. ~ Hal Erickson, Rovi

Teresa Szmigielówna
as the blond girl

Left me feeling like I was taken for a ride to nowhere.

What are the odds when you don't know you're enticing a potential murderer?La notte of the long-lost lovers, quite possibly the vanity of the ethereal breeze during this frail train ride.Kawalerowicz's synchronization when commenting the decisions and tribulations of his native fellowmen bites the dust,causes a challenging,almost psychological earthquake and plunges into a sorrowful pondering on how humanity's sake can and will forever fit inside a handful of train-wagons.