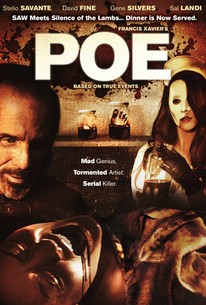 A distant descendant of literary horror legend Edgar Allan Poe agrees to pen the biography of a notorious serial killer, but realizes he may have gotten in over his head while witnessing scenes that would have made his famous ancestor white with fright. Johnathan Poe's morbid curiosity led him to accept the task of documenting a madman's heinous crimes. But has he been hired for his talent as a writer, or will he ultimately end up the killer's most prized victim? ~ Jason Buchanan, Rovi

There are no critic reviews yet for Poe. Keep checking Rotten Tomatoes for updates!

There are no featured reviews for Poe at this time.