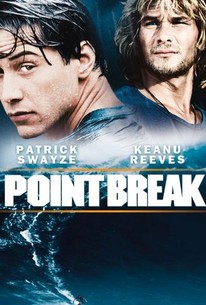 Critics Consensus: Absurd, over-the-top, and often wildly entertaining, Point Break is here to show you that the human spirit is still alive.

Critics Consensus: Absurd, over-the-top, and often wildly entertaining, Point Break is here to show you that the human spirit is still alive.

Critic Consensus: Absurd, over-the-top, and often wildly entertaining, Point Break is here to show you that the human spirit is still alive.

Michael Kopelow
as Passion for Slashin

Anthony Mangano
as Off Duty Cop

Point Break has some eye-catching visuals in its frenetic action sequences, but even the slow-mo surfing gets tedious. It's like being trapped in a soft-drink commercial.

While the critics may yammer, Point Break delivers the thrills, spills and crunches its action-hungry audience demands.

We might as well be watching a blissed-out Bill and Ted caper.

A hare-brained wild ride through big surf and bad vibes, Point Break acts like a huge, nasty wave, picking up viewers for a few major thrills but ultimately grinding them into the sand via overkill and absurdity.

In terms of Hollywood history, Bigelow's film is the perfect document of its time.

Much of the film feels as if an excuse for the cast to surf and skydive - a curious combination of daredevilry.

...a propulsive action film that's rarely been matched for in-camera thrills and spills in the great outdoors....

The change in Swayze's character in the third act soured this a bit for me. The inconsistency took away from the impressive action scenes and fun plot.

This is a very good action film despite some of the weird performances. It was very entertaining.

Come for the guns and money, stay for the sun-baked aphorisms and those big blue waves.

This handsome movie has well staged chases and shoot-outs, but humourlessly accepts its posturing hero at his own valuation.

A fun movie with a memorable performance from Patrick Swayze, but ultimately too silly to fully recommend. Keanu Reeves is mostly in his wheelhouse here, but he has had better performances and is pretty wooden in this. The action sequences are solid and there's enough suspense to keep you interested, but the script and screenplay are let down by outlandish plot elements and predictability. That was ultimately my biggest complaint, but it is certainly well directed by Kathryn Bigelow. If you want a mindless action film with some nice locales and action scenes, you can do worse. Just don't expect Shakespeare.

Before the Oscar winning heights of "The Hurt Locker", director Kathryn Bigelow cut her teeth on some intense and very impressive pieces of work; the brooding western/vampire movie "Near Dark", the stylish and futuristic "Strange Days" and "Point Break, the adrenaline filled action movie that proved a female director could compete with any male in the genre - hands down. A gang of bank robbers known as The Ex-Presidents have been looting the banks of coastal Los Angeles towns. Not much is known about them as they commit their crimes while wearing the masks of presidents Reagan, Nixon, Carter and Johnson. What is suspected is that they are surfers, so the F.B.I send in special agents Johnny Utah (Keanu Reeves) and Angelo Pappas (Gary Busey) to uncover more information. Soon Utah is mixed up with surfing guru Bodhi (Patrick Swayze) and gets drawn into his adrenaline filled, spiritual lifestyle. This film was a real favourite of mine growing up in the early 1990's and still ranks as one of the very best of cop/action movies. Quite simply, where it's strength lies is in some breathtakingly fantastic action scenes and shows that director Bigelow could always compete with the best of them when it comes to staging an action set-piece. The chase scene alone - through the streets by car before going on-foot through alleyways and houses and at one point, the involvement of a pit-bull - is one of the best action set-pieces committed to the screen and Bigelow should be immensely proud. This is also bookended by some excellent close-contact surfing scenes a spot of bank robbery and sublime skydiving. What more could you really want? It's a film filled with testosterone and macho posturing but it's unashamed in it's delivery. It even throws in some light spirituality and Bigelow juggles the elements with a high level of skill. One thing she doesn't have here is restraint but that's entirely the appeal. She's out to set pulses racing and have some fun and that's exactly what she does. If you give yourself over to it, you will too. Of course, the film's lack of restraint throws up some moments when it goes way over the top and stretches credulity to breaking point but it doesn't matter. It's entirely forgivable due to it's sheer indulgment and edge-of-your-seat entertainment. So is the action genre just one for the boys? According to Bigelow, the answer is a resounding... No. She displays such skill and conviction that she crafts one of the most enjoyable action yarns available. It's tagline is "100% pure adrenaline..." and on the evidence, it's not far off it.

The action sequences and set pieces are undeniably impressive and by far better than the average blockbuster. But the cliched, cheesy beyond belief, poor acting and excruciatingly painful plot make 'Point Break' overall a dour affair. The film tells the story of FBI agent, wait for it, Johnny Utah, played by Keanu Reeves, who has to go undercover as a surfer to infiltrate a team of bank robbers. One of the surfers happens to be Patrick Swayze who offers up one of the most hair pulling performances of his career, whilst Utah is joined by his partner Gary Busey, by far the best thing in it. The idea of a conflicted cop, forced to choose between his friends and 'true calling', and his job as an enforcer of the law has been done far too many times. Perhaps 'Point Break' was one too many. But more importantly than that, the plot, whilst full of memorable action scenes, does not really progress beyond the first half hour of the film where everything becomes apparent to any audience member. Of course one thing, as I have said already, that does not fail to impress and even inspire is the action. Bigelow's well crafted and put together sequences, especially those of the chase through the houses between Reeves and ex-President Reagan, is exciting and even summons up a brief moment of real emotional connections with the characters. However beyond that Utah, and Bodhi, Swayze, remain distant characters. It's no secret to my friends that Keanu Reeves is one of my least favourite actors, capable of only playing one character and one emotion. The same one he plays in 'Point Break'. However when he fails to even play that well you really do start to worry. Overall whilst fun, 'Point Break' should have been a much better film than it is. It's a disappointing thrill, but little more than a poor blockbuster with great action scenes.