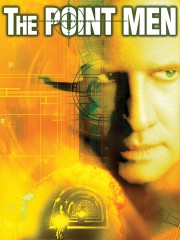 David G
½ August 9, 2012
Low budget thriller about an Israeli covert "Foreign Legion" team being bumped off one by one by the psychotic Palestinian extremist whom they've been hunting for years and a race against time to stop him before he derails a landmark peace conference between the two countries. Since The Point Men is little more than a low budget B-movie (possibly for TV?), you won't be surprised to learn that the acting's dodgy, it's ugly as sin to look at and there are few surprises, however, the scary thing is that despite all that it's actually pretty decent. Veteran Bond movie director John Glen deserves a lot of credit for holding your interest with such limited resources, as does Vincent Regan as the memorable villain. As an added bonus you get to see Maryam d'Abo's boobs!

Ian M
February 26, 2008
In his 20-year quest to be incorrectly casted as every human ethnicity, Lambert has been a Scottish Celt, a Chinese Light-god, a space-alien, an ancient Druid, and of course a Native American Eskimo; With the help of "The Point Men", he can now check off "Jewish Commando" from his wishlist.

What could be greater than a Zionist Christopher Lambert running around Europe murdering those pesky A-rabs? Not much, I'll tell you that. Especially since, even though he's playing an elite Israeli secret agent, Lambert still closes his eyes every time he fires the fake gun. Hoo-rah!

I hate to say it, but Lambertstein fits right in with the cast of extremely stereotypical Jews. Every single character has a gigantic nose, I almost felt racist just for watching it. I have to admit, I was sitting on the edge of my seat the whole movie, not because of suspense or anything, but because I was anxiously waiting Lambert to botch some lines in Hebrew. That would've been awesome. I would've recorded it, made it my ringtone, my Windows logon sound, and also play it at my funeral. Unfortunately he stuck to heavily-accented English the whole film. I suppose the producers and director had something called "common sense", and knew that Lambert speaking Yiddish would plunge the entire production into a B-movie oblivion.

Lambertgarten gives a predictable performance, and looks more like a middle manager at AT&T than a Jewish commando. In one memorable scene, Lambert visits a "Nazi Nightclub" and makes an unintelligible crack about Hitler. It might've been something about him only having one nutsack. Whatever he said, it was really great. As you might've guessed, the evil Palestinians ally themselves closely with neo-Nazis. Yeah, yep. But don't worry, Lamberg's all over it. Except on Shabbas!

Now the big evil Arab, "Amar", undergoes complete plastic surgery to become an Aryan and blend in with other normal people. I noticed this also turned him into a horrible actor with different eye-color and voice. A man more cynical than I might make a jab about how it's obviously just a different actor.. But I won't go there. Too classy.

In the end, I have to give credit where credit is due. The production and directing are top-notch (apparently John Glen also directed a few Bond films), the acting is mostly decent, the settings are believable, and the story is, although cliche, well-paced and solid. Christopher Weinbert's acting is really allowed to suck out in the open here. It's free-range suck. A must-see for anyone collecting Lambert ethnicities.

Evan L
December 23, 2007
A B-movie I caught during a bought with insomnia, Point Men is a Mossad action-thriller starring Christopher Lambert with a ridiculous story, bad acting and plot-holes galore. Calling it crap would be an insult to crap.

mohammed n
½ April 30, 2007
what i can say i love this movie no matter or whenever se on satellite.

Raven W
February 23, 2007
it was an interesting plot concept and the action held up