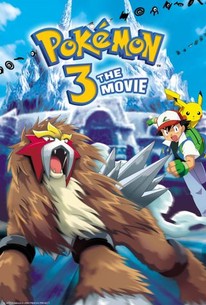 Critics Consensus: Critics say that the third Pokemon movie has a better plot than its two predecessors. This is not enough, however, to recommend it to those not already fans of the franchise.

Critics Consensus: Critics say that the third Pokemon movie has a better plot than its two predecessors. This is not enough, however, to recommend it to those not already fans of the franchise.

Critic Consensus: Critics say that the third Pokemon movie has a better plot than its two predecessors. This is not enough, however, to recommend it to those not already fans of the franchise.

In this animated feature, young Pokemon trainer Ash Ketchum and his loyal friends journey to the beautiful mountain town of Greenfield, where they will encounter the Unown, the most mysterious of all Pokemon. It is the Unown that create a challenge for Ash far greater than any Pokemon battle he has ever experienced before. With help from Pikachu and all his faithful Pokemon, plus friends Brock and Misty and even a little unexpected assistance from Team Rocket, Ash must rescue the young orphan Molly from the mystical forces that threaten to transform her life into a dreamworld prison. At the same time, Ash must also struggle to bring his own mother back from the realm of the Unown before she is lost forever and he becomes an orphan himself.

Critic Reviews for Pokémon 3: The Movie

The animation doesn't display the kind of artistic advances that would compensate for the underdeveloped story.

The animation and script still look as crummy as ever.

Lighter than its predecessors.

If not exactly enjoyable, then at least halfway tolerable.

Certainly parents' wallets are the lighter for it.

As ever, accompanying grown-ups should either take a good book or, better still, avoid the film completely by bribing another adult to go along instead.

Perfect for fans of the franchise; anyone else, though, will probably get bored and annoyed. [Full review in Spanish]

The lengthy battles here become tiresome in a film that says Pokémons live to battle but also know when to quit.

For kids and diehard fans, it's OK. Others beware.

One would think that three feature vehicles for Pikachu and his mind-numbing friends would be sufficient to convince our kids that there's got to be something better available and cause their interest in the avalanche of trashy collectibles to wane.

Audience Reviews for Pokémon 3: The Movie

Okay, I'll admit, that this has the weakest characters, but it also leads as being the most eventful of the franchise. It has the most complicated plot as a scientist discovers symbols, linking them to rare undiscovered pokemon. Ante, being the first pokemon found, is probably the most interesting legendary character so far, but there is just something about these films that I find wrong. Movies can only go so far, and with pokemon, they can't even pass the first two with good story.

Better, but still weird and depressing

as with every pokemon movie up until destiny deoxys a masterpiece

Returns some of the darkness of the first film. Here we find a bunch of legendary Pokemon making one young girl's dreams come true. Not as nice as it sounds when her imaginary world is a nightmare for the rest of the earth. Pokemon 3 does a lot of things right, such as limiting the number of Pokemon, allowing for more story. It also brings Ash back his Charizard for a while, which only makes sense, since he doesn't have any powerful Pokemon at this point in the continuity. Team Rocket are reduced to such a joke that even they question their appearance by breaking the 4th wall. More CGI, which doesn't quite mix with the simple anime style, adds something new but not essential.