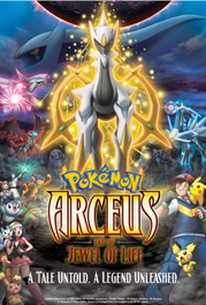 As Ash and friends arrive in Michina Town, the legendary Alpha Pokemon Arceus, stirred by the battle between Dialga and Palkia in Alamos Town, awakens to exact judgment on humanity for a betrayal it suffered in ancient times.

Critic Reviews for Pokémon: Arceus and the Jewel of Life

It's not terribly different to the other movies, but at least it feels a little more original. [Full review in Spanish]

Audience Reviews for Pokémon: Arceus and the Jewel of Life

Legends arise in Kunihiko Yuyama's Pokemon: Arceus and the Jewel of Life.

Set in the Pokemon universe, this film's 90 minute plot is quite loaded. There are numerous explanations with regards to the legendary Pokemon subplots and having a number of them duke it out for a good portion of the picture is a crowd-pleaser. Despite all that, one of the more intriguing pieces to the story, along with the Pichu segments, is the involvement of time travel. While there are some parts of the outcome that are questionable, they are easily forgivable. Hey, this is Pokemon.

The combination of animation and CGI isn't necessarily the cream of the crop; however, using them both together hardly hurts this film in anyway.

Aside from the voice of Arceus, which sounds a little weak and un-masculine, the rest of the cast is as expected. The human characters have matching voices, while the Pokemon sounds are just as adorable as they are.

Like many other things, Pokemon is not for everyone. As for Pokemon: Arceus and the Jewel of Life, it is a recommendable Pokemon adventure.

Pokémon: Arceus and the Jewel of Life Quotes