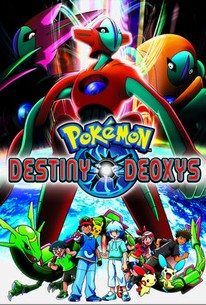 Leap into an amazing all-new action-packed movie and meet the mysterious Deoxys(TM) as this exciting Pok mon adventure takes you beyond your wildest imagination. Four years ago a strange meteorite crashed to earth carrying a powerful secret. Now journey to high-tech Larousse City where secrets are revealed as Ash, Pikachu, and the gang meet Tory -- a new friend who is afraid of Pok mon and their trainers. New fears surface when a mysterious aurora appears over the city along with Deoxys -- a Pok mon unlike any seen before. When a spectacular battle between Deoxys and Rayquaza begins, more than just Ash and Pikachu will be needed to stop it. It will take everyone! Charged with big surprises, nonstop action, and heroic adventure, POKEMON: DESTINY DEOXYS is packed with out-of-this-world thrills!

It's more of the same, but even duller and more repetitive. [Full review in Spanish]

This was the last good pokemon movie and they delivered with the epicness in this direct to video movie with the action and conflict between Rayquaza and Deoxys, which you don't know who the villain is so you could root for either side, that is great storytelling

This movie is the longest movie of Pokémon's history. In Japan, it is the fourth popular animation movie. Actually, the storyline of this movie is simple to understand. The drawing quality of this movie is also improved - with lots of 3D graphic - especially in Battle Towers. The sound effect is good, especially the ending music - Lovely Boy. Pokémon fans will enjoy this movie.

the worst from 'Pokemon The Movie' series