Pokémon: Lucario and the Mystery of Mew2006 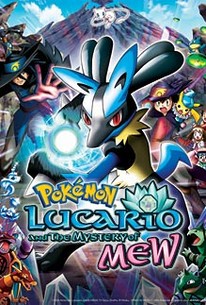 Pokémon: Lucario and the Mystery of Mew Photos

Traditional Pokemon animation blends with state-of-the-art computer generated effects in the eighth installment of the popular anime series. A special tournament is being staged for Prince Aaron, but as Ash Ketchem, Brock, Max, and May all prepare to take part in the celebratory event, Pikachu is abducted by the evil Mew. Now, in order to rescue their old friend and ensure that the tournament goes on as planned, Prince Aaron's Pokemon friend Lucario will lead the entire gang to the Tree of Beginning and defeat Mew in an explosive battle of truly epic proportions.

Critic Reviews for Pokémon: Lucario and the Mystery of Mew

It manages to expand the Pokémon world in surprisingly interesting ways. [Full review in Spanish]

Audience Reviews for Pokémon: Lucario and the Mystery of Mew

This was when pokemon started to die to me. This was the last pokemon movie with the original cast and they just made it fall flat and pokemon nowadays is on life support only with the games keeping it alive and the newer TV show with the whole cast being different (except for Pikachu which would be blasphemy if she was replaced) just keeps putting another nail in its coffin, or you could just say this movie was boring and it was the start of the death of pokemon

Great Pokemon movies since Pokemon : The First Movie..!!! The story is simple, really simple, but that works great for me... Besides, no bad Pokemon in this movie makes a big difference between another Pokemon movies... Now I know the recipe to make a great Pokemon movie, by having Mew in it...

The story itself is fresh and welcome to the series on all accounts. There are some well choreographed twists and a convincingly apocalyptic scene that builds up to the movie's sincerely touching conclusion. The movie's soundtrack is equally intriguingly above-par. The blending of 2D hand-drawn anime and 3D rendering effects is crisp and clean, and it works very well with the show. Overall, Lucario and the Mystery of Mew is an excellent endeavor by Pikachu Project.

Pokémon: Lucario and the Mystery of Mew Quotes