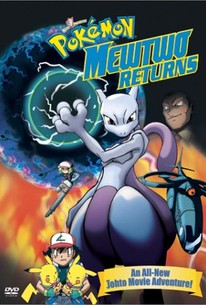 One of the most powerful, sinister Pokemon is featured in this entry in the popular animated franchise. Pokemon: Mewtwo Returns involves the genetically created Mewtwo's attempts to capture and harness the power of the beloved Pikachu. It so happens that Mewtwo's bitter over the fact that he's been cloned, and breaks ranks with his former owner in order to create a hidden hideaway where cloned evil Pokemon like himself can reside. When Ash, Misty, and Brock go to find Pikachu, they're in for a fight to the finish. ~ Michael Hastings, Rovi

A sequel to the first movie on the purest level: narratively, thematically, and stylistically. [Full review in Spanish]

The movie easily produces the same trance-like effect on young kids that an electronic baby swing does on infants.

Mewtwo doesn't exactly return. He's just rediscovered. In this follow-up to the 1st movie, Giovanni (being the only one that remembers Mewtwo) is the the hunt for his prized creation. It covers the same themes as the first movie, with Mewtwo and his clone friends trying to find their place in the world. The action isn't as good as the last two films, and the film misses a trick by not really having huge battles betweens humans and Pokemon. We get a new villain in the shape of 009, and Jessie and and James are good once again (something they seem to do for every film). It's good to see Mewtwo back, and it corrects the horrible mistake of making everyone forget the events of the last film.

i love the movie. The message from this movie is handled a bit too heavily, but at least it's less screwed with by the US dubbers than the first movie.