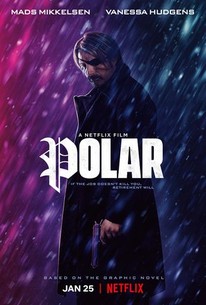 Critics Consensus: An action thriller starring Mads Mikkelsen as the world's most dangerous assassin should be terrifically entertaining, but Polar proves it's possible to ruin anything if you try.

Critics Consensus: An action thriller starring Mads Mikkelsen as the world's most dangerous assassin should be terrifically entertaining, but Polar proves it's possible to ruin anything if you try.

Critic Consensus: An action thriller starring Mads Mikkelsen as the world's most dangerous assassin should be terrifically entertaining, but Polar proves it's possible to ruin anything if you try.

The world's top assassin, Duncan Vizla, aka The Black Kaiser, is settling into retirement when his former employer marks him as a liability to the firm. Against his will, he finds himself back in the game going head to head with an army of younger, faster, ruthless killers who will stop at nothing to have him silenced.

Richard Dreyfuss
as Porter
View All

Grody to the max.

Polar is an astonishingly flaccid film, a movie that prioritizes blood splatter and bouncing butts over literally all else, including plot and character development.

If it has any redeeming qualities, it chooses to keep them a secret.

A gleefully unhinged teenage-boy dream that aims only for hard, shiny surfaces, and stays there.

Polar is pure trash, but the generousness - and, in the final stretch, the poignancy - with which Mikkelsen approaches even the most lurid of the film's conceits at least pushes it toward the top of the garbage heap.

There is a line of reasoning that dictates that any movie featuring Mads Mikkelsen with laser-gun-cannons attached to his hands should be at least a little fun. Netflix's Polar, directed by Jonas Åkerlund, somehow defies the odds.

Polar is a cliched, sloppy mess of sub-standard action and forgettable lines that might entertain someone who has never seen a movie from the last decade of R-rated action cinema.

The problem is, Åkerlund seems to think he's Quentin Tarantino, injecting gratuitous amounts of violence and torture into a film and calling it art.

Polar doesn't fully understand what a great idea it's stumbled into... it gets distracted by pointless Guy Ritchie-esque stylistic flourishes, a predictably tragic/heartwarming twist ending.

As just about every element of the film ranges from underwhelming to bad, I would be hard-pressed to recommend Polar to anyone other than hardcore fans of Mads Mikkelsen, and even then, there are countless better action films.

Polar is almost two hours of sensory overload that attempts to be a slick and gritty thriller but comes off as a brash, cluttered and crude film.

'Polar' isn't a total disaster thanks to Mikkelsen, but even he can't turn this film into something watchable. [Full Review in Spanish]

Blood, blades and bullets in droves, some sex and raunchy humor directed by the man who gave us Prodigy's "Smack my bitch up" video. Some "John Wick"-esque shootouts, crazy killers a la "Smokin' Aces", somber scenes of the retired killer who makes a new friend (the movie's strongest parts), as seen in "Leon", it all doesn't feel particularly fresh. There are some curious casting decisions and the marketing basically gives away a certain development. Sure, the film looks great, Mikkelsen is a wonderfully laconic leading man and overall that's entertaining enough. But it also feels so inhuman, vulgar and like you've seen it all before.